As promised, it's July 6th, and that means it's time for our third installment of our six-part GarageBand Profile Mini-Series! As we inch closer to popular music site GarageBand.com's shutdown, my quest to keep the local metal bands on there alive is in full swing, and today, we head back to 2006 to discuss a pair of very closely linked hard rock bands! Aside from spelling/grammar edits, link/video updates, and some additional useful artist info and analysis, this is a closely transferred copy of the original GarageBand profiles, with everything relevant still intact. Also note that, because these bands are very similar in name and members, much of the content is combined. Enjoy, and remember to watch out for the last 3 profiles over the next 9 days! (Edited: May 26th, 2013)
---------------------------------------------------------------------------------- 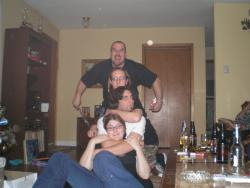 Bio: Casey wrote some songs & played them on the guitar. Matt said "Lets do it." Matt and Casey got together & started jamming these songs off. Chris said "Hey, I'll sing", then Chris came in and added the vocal perfection that the songs deserve. Casey said "Let's record." Matt & Chris said "Cool." Throw in Kay on the low end, and everything worked out perfect. 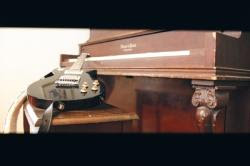 Artist URL: None (Aside from the GarageBand pages, neither incarnation have an internet page to my knowledge.)

Songs (All recorded as MY ID):Bleed
Laid
Four

SMS Analysis: T.H.E.I.D/MY ID never seemed to take off very far past GarageBand in their 2006 heyday. I never heard of them playing live & I can't even think of most of the members being in other bands, save for Riverin singer/drummer Matt Hicks, who's also known for his work in Dirty Virgin. I can't comment on T.H.E.I.D's sound because that incarnation had no audio, but chances are they were quite similar to MY ID, who had 3 songs online! I noticed after listening to MY ID's material that their sound was really varied on each song. "Bleed" is a mid-tempo hard rocker with solid Eddie Vedder-esque vocals from Chris Luxton and really good drumming from Matt Hicks, but the guitar & bass (though good) are mixed WAY too low. That takes away from the song, but it has loads of promise! "Laid" is a complete departure soundwise, a soft ballad about, well, getting laid. It has a Hawaiian vibe to it from the backing melody, and the singing is slightly monotone and repetitive, though the lyrics are funny at parts! "Four" is also a ballad, and definitely a better one, with well written lyrics about a child's view of parental conflict. Great singing from Chris, and Casey's instrumentation is good, though it could stand for less repetition. I don't know what happened to T.H.E.I.D/MY ID, but they sounded very promising, just needing some more heavy songs and a better mix.

Videos: None to speak of, though almost all Dirty Virgin videos will feature Matt Hicks on drums. For that reason, and because no other band pages exist for after GarageBand's closure, I have uploaded all three MY ID songs onto The Sault Metal Scene's YouTube channel for you guys to check out! Remember, these songs would otherwise be deleted from the internet on July 15th if they weren't uploaded somewhere, and this stuff should be heard! NO COPYRIGHT INFRINGEMENT IS INTENDED!! With that in mind, here's MY ID's songs!