Audio/Video: Amethyst released at least two albums during their run (both of which are now out of print) including a late 1980s debut cassette & a later CD named "Innocent As Hell" in 1994. Though both are very hard to track down physically, "Innocent As Hell" is available for digital download via their posthumous Reverbnation page for $9.99, and can be streamed there & on YouTube as well! For videos, the band did record a music video for their single "Waste of Time" from their cassette, but it's only online upload was privatized for unknown reasons. The only publically available video footage of Amethyst (that I know of) is this video compiling assorted live performances and photos with their 1994 song "Snakeye Strut", as made & uploaded by singer Rick Dellavedova in 2010, so give it a look below! 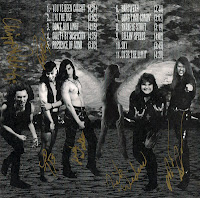 Info/Analysis: Amethyst were a heavy metal band that was active in the Sault Ontario music scene from roughly the late 1980s through the mid 1990s. Online information on their local run is minimal, but they were among the more successful local metal bands during their run, releasing two albums, gaining major press notices, and playing numerous high profile concerts before going inactive circa 1995. Though Amethyst are long since broken up, most band members took part in later music projects since, including bassist Chipp Robb's prolific Calgary-area work & drummer Phily S. Tempo's recent local metal bands. I was way too young to enjoy Amethyst at their peak, but I really like the songs I heard on their CD (and their "Waste of Time" video when it was available), and they shown a lot of energy and aggression when needed on their originals! The members all had good chemistry and clear talent, ranging from Rick Widow's highly capable singing to Jose Wales' guitar shredding and solos, and I'm sure they set many stages on fire during their run!

It'd be great to see a reunion of some type (or at least get a hold of their cassette), but Amethyst were a clear bright spot on the local scene in their heyday, and if you love classic heavy metal or hair metal, you'd be well served to check out their available material at the above links!
--------------------------------------------------------------------------------
I hope you guys liked this month's Defunct Local Band Profile! It'd be nice to know more about Amethyst on the whole, but at least there's available posthumous information and media on them, and hopefully they remain in the consciousness of the local metal scene! For our last post in this series of 2012, I've randomly chosen the defunct Sault Ontario metal band No Remains, a mid-2000s project that, despite never visibly playing live, have a lot to say and cover! Watch out for it on or around December 10th, and I'll see you guys at TONIGHT'S Saigon Hookers show! Thanks everyone!
Posted by The Sault Metal Scene at 8:00 PM

Rudyard Musicians Festival
Rudyard Township Park, third Saturday of August annually since 2016 (not held in 2020 or 2021)