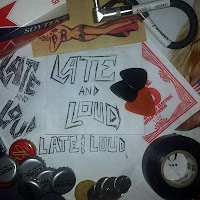 November is almost over, so let`s end the month with our latest local metal/hard rock CD review at the SMS! For our 41st monthly CD review on the site, I've chosen a new CD for the second straight month, and this time around, it's for Sault Ontario classic metal quartet Late & Loud's debut (and perhaps only?) EP, entitled "Heavy Rockin' Hard Metal"! Independently released on November 10th during the band's return concert at The Rockstar Bar, the disc was primarily recorded with producer Dave Pihlaja earlier this year at what I believe is now the Smoke & Oak Room Studio, though the last two tracks were self-recorded. Late & Loud's current lineup is present here, with singer/guitarists Jonathan Tiberi & Brendan Christie joined by bassist Benn Garside and drummer Josh Hatherley. Copies of this demo EP are available for $6 at concerts featuring band members, though it's unclear on whether further pressings will be produced. As well, the first 5 songs can all be streamed at L&L's Reverbnation page, so give them a preview listen there!

With 7 songs clocking in at around 28 minutes of music, let's begin with the EP's first song, "Fast as a Bitch"! Kicking into a familiar heavy metal groove from the start, you can immediately tell that there's very good production for this album, and even early, their talent is there! Guitarist Jonathan Tiberi sings on this track, and while he doesn't have a wide range, he uses it to the best of his ability here, and there's enough aggression to suit the material! It's a catchy number that calls in mind a 1980s metal swagger, and the members are (for the most part) firing on all cylinders! If anything's wrong with this track, it's that the chorus isn't melodic enough, as the gang vocals don't have the right "oomph" or melody to compliment the verses. The guitar solo, however, is well done (if not blisteringly fast), and their attitude is ever present! This is a quality first track on "Heavy Rockin' Hard Metal", and hopefully a harbinger of what's to come!

Second is "Rock 'En Roll",  which after a bit of feedback, launches into more of a classic rock rhythm with a catchy swing riff, and it also captures it's sound well as an ever older school song than their sound leans towards! The vocals even have more of a casual flow, and Josh Hatherley actually pulls off this song better as a pure singer than on "Fast as a Bitch"! That said, this isn't quite as heavy as the previous track, and it's way too short, but Late & Loud's talent shows well here, including drummer Josh Hatherley's nicely paced work! It's an even better track to me, and if you like 1970s-era hard rock, this will work out for you! Third of the main 5 tracks is "Machine Gun Maiden", which has a great opening with a nice machine gun-esque drum section and more quality guitar and bass work, and it's definitely the coolest and newest sounding for the song's overall themes! The verses have that omninous dark feel vocally, but the choruses do lack, as they seem to have more melody and intensity live. They almost sound mailed in, but the guitar solo doesn't (and it thankfully longer), and Benn Garside's bass work here is the best that I've heard so far! If the vocals were more energetic, this song would be even better, but it still works well as a more modern metal track!

Track #4 is "Heavy or Bust", which launches into a great heavy metal riff and opening with an awesome guitar solo section and nice energetic singing from Jon, fitting better than ever for his more aggressive singing, and the instrumental section immediately before the chorus is great to headbang with! The choruses could stand to be a bit more melodic, but he's using his voice well, and the members are tearing it up musically, with Jon and Brendan laying down some awesome guitar work, and the late drum solo from Josh Hatherley is a nice little bonus that is often extended live! Easily my favourite song on the EP so far, this packs a great punch with lots of aggression, catchiness, and classic metal attitude! The last properly recorded song on the EP is "Whisper of the Damned", this has the best opening of them all, with an instantly recognizable guitar-driven opening! Brendan Christie handles vocals here, with a higher tone and I'd say a slightly more powerful voice than Jon's, though not as aggressive overall. Here, I find the mix isn't as good as on earlier songs, with the vocals somewhat bleeding with the music, but it's another very entertaining track with great guitar work and solid drumming, and it's a nice standout track to go with the others of the main 5!

"Heavy Rockin' Hard Metal" also includes two bonus tracks (the jewel case labels them as "unreleased Late & Loud recordings", but both are noticeably lacking in production given that they were self-recorded, including more distorted vocals and a somewhat messier overall mix. The first of the two bonus tracks is "Love Letter Lockdown", which goes well with earlier tracks for it's classic metal stylings, including a nice overall melody and effectively used vocals which flow well with the music as a whole, while the drumming fits well, and the guitar solo is proficiently played! That said, the singing does seem to get quieter late in the track, and the song is shorter than I'd have liked. The other bonus track is "Never Again", an older original of theirs that's nice to hear again, but it is noticeably more reserved than it's preceding tracks. More mid-paced with a general rock rhythm and more casual vocals, it doesn't have the blistering aggression or classic feel that better songs on this EP have, and the worse production doesn't help. That said, it's still a nice rock song with some harsher moments, and the last half of this song has a nice extended jam feel that has a spark that could have ignited the first half!

So, how do I grade Late & Loud's debut demo/EP? Well, it's a great selection of entertaining hard rock and classic metal originals from one of the area's most promising metal bands! On the whole, the members shown great talent as musicians, with Jon Tiberi & Brendan Christie's guitar riffs and solos driving this material long and hard, while Benn Garside's bass work tended to be very proficient, and Josh Hatherley shone on drums throughout as well! Vocally, Jon and Brendan did as good a job as they can with their vocal ranges, with Brendan exhibiting a bit better range, while Jon's was grittier and more aggressive. The guys also had good chemistry, and a nice classic metal sensibility that carried them through standout tracks like "Heavy or Bust" and "Whisper of the Damned", that seemed to slowly improve as the EP wore on! That said, it's not a perfect disc, partly due to some shorter than expected tracks, and the recording quality of the bonus tracks, which are a jarring change from the original 5 songs, but I understand that they're bonus tracks and not of the main 5 songs.

It'd have been nice to have heard more songs on the release too ("Live For Excess" is a disappointing exclusion, for example), and of course, a full time singer might have improved these songs, but the core Late & Loud members filled that role at the maximum level that they could! I hope this doesn't mark the end of Late & Loud's run (especially given their recent breakup and related concerns), but if it does, it marks some very entertaining metal originals from one of the area's most prominent recent bands, and don't let this material slip you by, so check it out at the above links, and buy it if you can! That's all for this month, but keep an eye out for a special all-video post tomorrow concerning a recent concert event, this month's "Where Are The New Albums?" post on Sunday, and as for our last CD review of 2012? It's still going to be Mike Haggith's new album "Neighbourhood Watch", and it's coming way sooner than you think! Stay tuned!
Posted by The Sault Metal Scene at 8:13 PM