Tonight's news post is essentially a local metal video showcase, but it's full of big news beyond just that, so what's in store? Well, we have a commercial for a major upcoming concert, video footage from a recent show at a newer local concert venue, and all that you should know on the newest Sault Ontario metal CD release, but first, we have a new local band to introduce, so here's what you need to know (and check out our review of last night's Skeletonwitch show in the post below this one!)

Haggith frontman Curtis McKenzie has returned to solo work with a new side project named Sound X! You may remember that Curtis fronted various similar bands like Restricted Illusions & 20 Pack of Marshmallows (many with Haggith guitarist Daniel Horton involved) since the late 2000s, but this is a completely new project that Curtis has been posting about on his solo Facebook page since May 22nd (it'd previously focused mostly on his Haggith work.) He's already announced plans to release a Sound X album this fall named "Three Year Relapse" featuring a mix of older originals and newer songs (including the former Haggith band song "That Cold Winter Breeze"), and this project will feature Curtis on all instruments except drums (Daniel Horton's covering that), while Haggith drummer Mike Haggith will produce and mix the material at Paperclip Productions. To that end, Curtis has posted the first Sound X song named "Disengage" onto his new YouTube channel, so how does it sound?

It sounds good so far, nice catchy alternative hard rock sound, but I worry that it might sound too similar to Haggith originals, and I'd like to see Curtis shake things up a bit to separate the two projects musically. I like where it's going though, so check out Sound X's first public song below, and as I've added them to our active Sault Ontario band links! (There's no official Sound X page yet, but Curtis' solo page fills that need in the interim.) 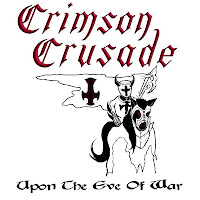 Next up, here's what you should know about local death metal quartet Crimson Crusade's debut EP! Released after their set at the Skeletonwitch show at The Canadian on Monday night, "Upon The Eve Of War" does still feature 5 songs (all of which are streamable online as well), and the songs are "Vanquish The Tyrant", "Left For Dead", "Crimson Crusade", "Pillage", and the last to be unveiled online, "Consumed", with a total runtime of about 20 minutes. Featuring their current lineup (including singer/guitarist Devon Lucier, guitarist Robert Sartini, bassist Riley Marshall, and drummer Robert Crossley), this was recorded in the winter at The Smoke & Oak Room Studio with producer Dave Pihlaja, and it's packaged in a slim jewel case with cover artwork as pictured, and liner notes secured in the case (though they're surprisingly minimal in content.) I won't comment on the songs in full yet though, as I plan on reviewing this in either July or August (Haggith's "Deuce" is this month, and I'm not sure whether to do this or the Woods of Ypres tribute album next month), but it will get a formal review, I promise!

I presume Crimson Crusade will have copies of "Upon The Eve Of War" on sale at future concerts for $5, but for now, stream the tracks at the band's Reverbnation page and Devon's YouTube channel, and as we haven't plugged it formally on here before today, here's the EP's last song (on the disc and in uploading order) "Consumed", so give it and the rest of the songs a listen!

Also in the realm of new videos, Local2's Mike Caruso was on hand for last Saturday's Faces of the Soup Kitchen event at the Machine Shop building at Mill Square (the former St. Mary's Paper site), and he uploaded a video of the musical performers from the event onto Local2's YouTube channel (and as part of this article), which amounts to our first footage of live acts at the Machine Shop. The video features local cover rock band Obsession covering Vanity Fair's "Hitchin' A Ride", M.D. Dunn playing what I think is an original track, Caveman Morrison frontman Tym Morrison covering Little Texas' "What Might Have Been", Frank Bock playing his rendition of "Dream A Little Dream Of Me", and Griphook frontman Jim O'Leary and friends (including Obsession's Valerie Powley) covering Nazareth's "Sunshine", so click each link to go directly to those songs! Note that Tym didn't play solo entirely on Saturday, as you can see Caveman Morrison drummer Johnny Belanger behind the kit in the video, so there was some full band performances as well.

Though not the heaviest show, it was for a great cause to both benefit the Soup Kitchen and introduce locals to what's going on at Mill Square now, and you can catch up on more of the day's events, vendors, and sights at this location! The Machine Shop looks nice and seems to have good acoustics, and I hope we see more live bands there in the future! As for the performers, all put in good sets, and it's nice hearing a Nazareth cover especially from Jim and company, so give them a listen below! (For metal/hard rock seekers, Tym's on about 6 minutes in, and Jim and friends play about 11 minutes in.)

Finally for today, here's something a little different: A commercial for Tesla's fourth concert at The Dreammaker's Theater at the Sault Michigan Kewadin Casino on July 27th! 30 seconds in length, it features plugs for the show and where to buy tickets, along with live clips of them playing some of their hit songs (including "Signs" and "Love Song"), and though it's well put together, the voice over narration could be more excitable for a show of this size. Posted onto Kewadin's YouTube channel on Friday, I don't know if this is running on TV, but give this commercial a look below, and get your tickets before they're gone!

That's all for today, but stay tuned for weekend concert previews and more in the next few days! Thanks everyone!
Posted by The Sault Metal Scene at 3:00 PM