It's time for another local metal video showcase! A frequent sight on the SMS, this post includes a bunch of newer videos featuring or focused on local metal bands, and we have some good notable clips today! So we have a local band's first ever music video, new live footage of a young local quartet, new video uploads from a prolific solo musician, and this week's classic video, so let's kick things off with our first videos! These are in alphabetical order by band name.

Firstly, here's the latest video footage from Sault Michigan hard rock quartet Abstract, who as you may remember, are comprised of 11-12 year old kids from the Guitar Studio summer rock camp. On Thursday, the band launched an official YouTube channel, which now features two videos of the band in action from recent rehearsal sessions! The videos are of Abstract covering AC/DC's "Back In Black" and Wolfmother's "Woman", and I have to say, these kids have a lot more promise than I thought from their last videos! They honestly have a good grasp on these songs, especially given their age, and musically, they have good chemistry! I can barely hear Jacob Hotlen's vocals over the band, which doesn't help their sound, but I think he pulls off Wolfmother a bit better than AC/DC. If these guys keep on with what they're doing, I hope they'll see some big local success, cause if they sound like this at 12 years old, how will they sound in another decade? Check out the above links for more on Abstract, including both videos, but I'll embed one here, so here's Abstract covering "Woman" by Wolfmother! 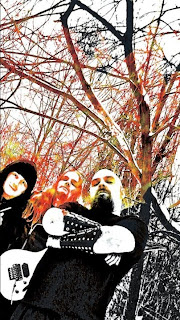 Next is the first music video from Sault Michigan/Grand Rapids epic metal trio End of Existence! It's for their song "Sun Is Gone", as posted today on their official YouTube channel, and the band make use of a lot of imagery in the video! We get shots of frontman Bob "Orb Hearthstone" Helsten and guitarist Steve "Sven Gilesten" Giles playing in a forest, the full band (including drummer Greg "Grg Gilesten" Giles) rocking out, lots of stock footage and dark imagery, and even Bob taking on a "high up role" during the spoken word section that I won't spoil here. Heavy use of filters too, making most of the visuals look black and orange, like their usual colour schemes on their pages. The video actually fits the song fairly well, and the song itself is really good on it's own merits as well! Reminds me of Integrated System of Machines in ways, if they included a lot more clean singing, and that's certainly not a criticism! You can of course check out End of Existence's first music video below, but before I move on, they have a brand new song posted on their Reverbnation page as well! Entitled "Arise", it's pretty heavy with nice use of clean singing to contrast Bob's heavy growling, and it has a nice galloping quality with the drumming! Good stuff, click here to check it out, and check out all of the above links for more! Now, here's the video for "Sun Is Gone"

hirdly, prolific local hard rock guitarist Mike Cliffe uploaded six brand new videos onto his official YouTube channel last night! All are uploads of past original songs of his, though they do mostly feature original slideshows to accompany them. The new videos are for Mike's songs "Mud Sandwich", "Winter Takita Bird", "Fusion of Time" (the new title for what was previously "Name This Song"), "Secrets", "The Town in 4 Minutes", and "Evil Tuba"! These are mostly recent songs, of varying sounds and styles, but it should be noted that only two of the videos ("Fusion of Time" and the one linked below) feature actual video footage. "Mud Sandwich" and "Evil Tuba" will appeal the most to metalheads, but the rest have their own experimental flourishes, from jazz to techno, and are worth checking out on their own merits! The above links will take you to all of Mike's new videos, or you can hear dozens at his Reverbnation page as well! The one I'm embedding here is for "Evil Tuba", his collaboration with veteran local drummer Glen Thomas, which features lots of tiled video footage of Mike playing this song on guitar, though seeing some shots of Glen drumming would have added to it. Good stuff, check it out below, and more at the above links!

nd finally, here's our latest weekly classic video! It's a bit early on purpose, so I could ensure enough videos for this post, so here's what you should know! Again, I'm tying this in with a performer at an upcoming local concert, and this week, it's Sykotyk Rampage bassist Brian Cattapan! Brian's been seen in a few different local projects, one of which was a Rage Against The Machine cover band in late 2009! Initially known as Dysfunkshunal Kemistry, he only played one show with them (I think), at a Sykotyk Rampage concert at The Outback on October 16th, 2009. This video comes from that concert, and it's of their rendition of the Rage Against The Machine song "Freedom"! Dysfunkshunal Kemistry's lineup included Brian on bass, singer Kevin Bouchard, guitarist Jason Wysynski, and drummer Steve Brogno, who you'll likely recognize from his work in Driving Dave Home and as Turner Up's original drummer! (FYI, Steve now lives in Ottawa, where he has drummed for an indie band named Open City.) Not long after this show, Brian was replaced by Steve's old Driving Dave Home bandmate David Grawbarger, and their name was changed to Renegades. They played at least once under this name, at Top Hat Billiards at Sense of Truth's Halloween concert there, and dressed up as Ghostbusters for the occasion!

I don't remember them playing other shows, they had no visible internet pages, and I think they broke up not long afterwards, so this video is one of the few glimpses we have of Renegades in action! This video was filmed by an attendee and later uploaded to Facebook by Jason Wysynski onto his personal Facebook page. The original video can be viewed at http://facebook.com/video/video.php?v=104020099612366, and NO COPYRIGHT INFRINGEMENT IS INTENDED!!! This video deserves a wider audience, I just want to help it get extra exposure! It's a good performance, though there is some hit and miss elements, particularly with the vocals. If you're a Rage fan, give this video a look, so check out Dysfunkshunal Kemistry/Renegades playing "Freedom"!

That's all for today, but stay tuned tomorrow for our Defunct Local Band Profile on The Grape Slushies and much more in the coming days! Thanks everyone!
Posted by The Sault Metal Scene at 1:35 PM