Hey guys, it's time for our second post of three on this triple post Saturday! Remember to check out our news post featuring updates from Destroilet, Half A Man, Meatplow, and a special concert event this summer at the post below! The "Woods I" review is still on for later tonight as scheduled, and I have news ranging from Rich Moreland's new concert booking company to the latest band switch at an upcoming concert for a news post tomorrow as well, so stay tuned for all of that! Now to this latest post, beginning with a SHORT NOTICE LOCAL CONCERT ALERT!!

Two weeks before hitting The Oddfellows Hall for The Sewer Swampstravaganja, local classic metal quartet Late & Loud will return to the stage TONIGHT at Foggy Notions! I apologize for the short notice, word on this concert didn't come out until yesterday afternoon. It's nice to see Late & Loud getting so many bookings at Foggy Notions, but I wish they'd let us know about them with more advance warning than just a day. Oh well, a show's a show, so make it to Foggy's tonight if you can for some entertaining heavy metal! They're on tonight at 11:00 PM, there's no announced cover charge, and you must be 19 to attend. For more details, visit their Facebook page! I still have to make it out to see them one of these days, be it on April 9th at The Oddfellows Hall or sooner! I've always been a fan of Brendan Christie's solo work, the band have good chemistry from the videos I've seen, and hopefully tonight's show is a success! Check the above links for more, and when I find embeddable video footage of Late & Loud in action, I'll have it here!

And now, it's time to update our SMS March Mayhem tournament brackets! Yes, our poll tournament between 28 local metal bands is now down to 24 following the end of our first week of voting, and I want to thank all of you guys for the enthusiastic voting numbers so far! We got 20 or more votes in all of the first 4 polls from the opening round, and I've heard mostly good things from readers about the tournament, so thank you all so much! So, what were the final totals for the first 4 matchups? Here they are!

What do you guys think? I'm honestly surprised that Caveman Morrison didn't pull in more votes, but the Browbeat 101 support is encouraging for them! I assume Changing Waves' low totals are more due to local unfamiliarity at this point, as they are relatively young, but still, Destroilet had the biggest win of these four matchups by point ratio! The Bear Hunters' just narrowly edging out Bring The Fallen was interesting, especially given that this matchup went both ways all week! As for Frightlight vs. Gates of Winter, it's just the joy of where they were seeded, as both of their totals would have had them beating any other band from the opening polls! But Frightlight fans pulled through to ensure a victory with 46 votes, so they're moving on to the second round! Thanks again to everyone for voting! Now, here's the updated bracket for SMS March Mayhem! 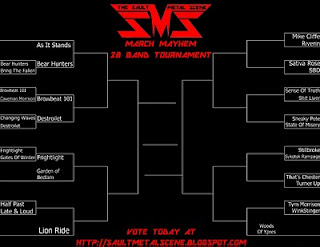 As you can see, The Bear Hunters will now face As It Stands in the second round of the tournament, thanks to As It Stands' first round bye. Browbeat 101 will face off with Destroilet in the next round, and Frightlight will clash with Garden of Bedlam, who also received a first round bye. Those polls begin in two weeks, along with Lion Ride vs. either Half Past or Late & Loud, so remember that! A couple more bracket notes: I obviously added "101" to Browbeat's name to reflect their recent name change, the bracket modification for the Frightlight/Gates/Garden section is just to reflect alphabetical order given Frightlight's victory, and biggest of all, I restored Turner Up to their old spot in the tournament, now that they are in fact still active. Apologies to Skull After Betrayal, I'll make it up to you guys! With that said, the next four 1st round polls for March Mayhem are now online, and the same rules apply as before. You have one week to vote, it's one vote per person, and pick your favourite band in each of the four matchups below with the polls on your left! 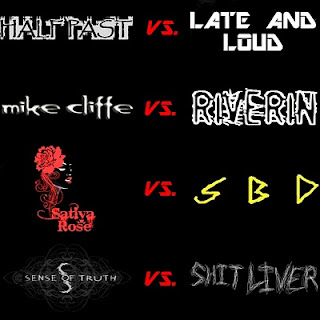 Can newcomers Late & Loud surprise Half Past with a victory in the opening round? Will Mike Cliffe's experimental hard rock trump the industrial sounds of Riverin? In this battle of local hard rock trios, will Sativa Rose's classic metal overcome SBD's experimental grunge stylings? And despite their long hiatus from the stage, can Sense of Truth deliver a knockout blow to rising grimecore rockers Shit Liver? The Half Past/Late & Loud winner faces Lion Ride in two weeks, the Cliffe/Riverin & Sativa Rose/SBD winners will face each other in three weeks, and the SoT/Shit Liver winner faces the winner of next week's Sneaky Pete/State of Misery match in three weeks. So there are our latest March Mayhem first round battles, and to vote, the polls are on your left! VOTE TODAY, YOU HAVE ONE WEEK!

(Apologies to Late & Loud for the "logo", as I haven't seen an official logo for them yet, so I just made up a wordmark to fit the picture. If one pops up, I'll add it!)

That's all for now, but VOTE IN THE NEW TOURNAMENT POLLS TODAY, and stay tuned for our review of Woods of Ypres' debut EP later tonight! Thanks everyone!
Posted by The Sault Metal Scene at 2:26 PM