Saultites In Out Of Town Bands Profile: Buster Cherry 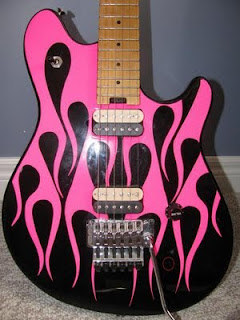 Lineup: (Saultites in RED; ex-members in italics. The instruments that the members played may be incorrect. If you can correct anything or add a missing element, let me know at robertfigures@outlook.com)

Local Info: Two Saultites found their way into Buster Cherry, those being guitarist Terry Eaton and drummer Vinnie Milosevich, who should be familiar for their work in some older area metal bands! Terry and Vinnie were longtime bandmates of prolific local bassist Dan Beaupre (currently of Griphook) in a few of his old metal bands, like Hollow, Carbon Black, and Metal Militia, though these bands predate internet pages and profiles. At some point (I assume the early 2000s), Terry and Vinnie moved to Southern Ontario, where they commenced work on Buster Cherry, though Terry moved back to the Soo in 2011, where he's played primarily in bands like Asylum Country, Mourning Wood, and Two Buck Beers since, while Vinnie has played recently with bands like Knee Deep & Curse The Witch.

Band Bio: I honestly can't tell you much about Buster Cherry by themselves. They don't appear to have been active for too long judging by the amount of activity on their Reverbnation page, but the page does include material from one of Terry & Cory Valentine's older bands named Blynd Image that predated Buster Cherry. No photos of the band exist either, but the guitar on their page's sole image is Terry Eaton's, as proven at this link. Buster Cherry were based out of St. Thomas, Ontario, which is roughly a half hour south of London. I don't know much about the background of Steve Bendis or Cory Valentine either, but a "Steven Bendis" still works in London as a homebrew music producer. Their page features four songs, including an unfinished track named "Believe", "Digging Yourself A Hole", and two Blynd Image-era tracks, "I'll Be Waiting" & "It's Not Love". The Blynd Image songs are more reserved and seem to take cues from 1980s mainstream hair metal, while the newer Buster Cherry songs are more straightforward hard rock, more similar to Terry and Vinnie's past local work.

Of the four songs Buster Cherry posted, I definitely don't enjoy the Blynd Image songs as much, though the singing's a lot better, with the singer making great use of his range! I just find them too soft and reserved, like they were intentionally trying to write a radio single both times, especially with "I'll Be Waiting". "Believe" has loads of promise, and it reminds me of a few hard rock bands I've seen locally, but there's no finished version. "Digging Yourself A Hole" is slower but still heavy, with nice riffing and excellent bass work! The songs don't take a lot of risks, and they need more guitar solos, but Buster Cherry did have promise! I'd love to hear a full version of "Believe" especially. My biggest complaint for the material as it's presented is the lack of a second guitarist, which would fill their sound out more, but Buster Cherry are still a good hard rock band that deserve some posthumous attention! I hope these guys are still doing some stuff musically in some form!

Again, Buster Cherry only have one internet page, and the 4 songs mentioned above are there to stream, so click here to check them out! As such, there are no videos of the band in action, so I uploaded the only full "Buster Cherry" song to The Sault Metal Scene's YouTube channel for you guys to check out! So here's Buster Cherry's song "Digging Yourself A Hole"!

That's all for now, but stay tuned for more local metal news and notes very soon, including weekend concert previews! Thanks everyone!
Posted by The Sault Metal Scene at 12:00 AM