One more post for you guys before I head to The Oddfellows Hall TONIGHT, full of some notable updates! We have three bands who have tentative dates in Sault Ontario that I'll go over, an update on our local musicians union, and first, here's some Bear Hunters-related updates, including a schedule change for tonight's concert!

WinkStinger are now the co-headliners for tonight's Icy Metal For Aborted Therapy concert at The Oddfellows Hall due to prior work commitments for at least one band member. This means that both The Bear Hunters (pictured) and State of Misery will be pushed back in the band order, though Sativa Rose & Bring The Fallen's slots are unchanged. Also, the concert has been pushed back an hour so it will now start at 6:00 PM with the doors opening at 5:30 PM. Nothing else has changed, but make note of these so you don't show up early or miss a certain band! Thanks to Bear Hunters guitarist Mitch Sirie for these updates, as sent to attendees in a Facebook e-mail. While we're on the subject of The Bear Hunters, they've talked about a lot of intriguing things for their future, including plans for both an EP and a full length album this year, with the EP to include a DVD in the package, and a planned tribute to the Big Four thrash metal bands for future shows! I probably won't cover any Bear Hunters albums here until recording officially starts, but keep all this in mind, as they have big hopes for this year! Check out their official Facebook page for more!

Now for three tentative local metal concerts, two of which need a venue, the other of which needs openers! We'll go in chronological order, and firstly, an out of town metal band looks to be the headliners at an upcoming Roosevelt Hotel metal night! Rosie owner Chad LaRoue was inquiring yesterday on the Metal Nights at The Rosie Facebook page as to local openers for a band named Skepsis on February 17th, which is a Thursday and two weeks after the next metal night on the 3rd. So I looked up Skepsis to see who they were, and believe it or not, there's at least THREE Canadian bands with this name, maybe more! None have definite dates listed for February in town though, and the only one that is hinting towards February shows doesn't even describe themselves as metal. I'm not comfortable enough to assume which Skepsis it is, but if you wanna open for them at the presumed February 17th metal night, get a hold of Chad at this location! When I hear more, especialy concerning which Skepsis this is, I'll let you guys know! 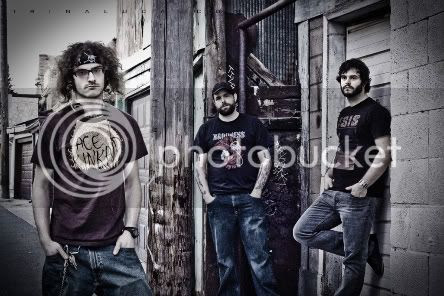 Now to shows without venues, and we'll start with a band we saw here last year! Toronto instrumental progressive trio The Isosceles Project are tentatively planning a return show in Sault Ontario on May 23rd! You may remember when they came here last August one night after the Kiss concert as one of the openers for Skull Fist at The Canadian Nightclub, or maybe you saw them on Disband on MuchMusic! A venue, additional bands, or any specific details aren't known yet for this show, so I take it nothing's finalized. Bassist Scott Tessier had told me that they are playing a longer set than they had last year, so that's a good sign! I take it the band doesn't have a finalized booking yet though, so if you're interested in booking or promoting The Isosceles Project for a local concert on May 23rd, message the band at their official MySpace page! I hope this gets finalized, as I was VERY impressed with The Isosceles Project last year, and their progressive instrumental attack will surely leave you guys wanting more as well! Stay tuned for updates if I hear them!

The other possible new concert has no specific date in mind, but maybe you can help secure one? When I was browsing the 705 Video Magazine forum recently, I came across a topic about a band's efforts to secure a local booking in May or June. The band is Vancouver progressive metal quintet Unleash The Archers, and singer/guitarist Brayden Dycszkowski posted there in the hopes of securing a booking for the band in that timeframe for their upcoming tour cycle in support of their new album. I like their sound, it's a creative mix of extreme death metal and melodic female-fronted metal, and they're pretty heavy to boot! The band has no real contacts in town, so I'll do what I can to help get them a booking in town this year! If you're interested in helping set up an Unleash The Archers concert in town later this year, contact the above links to show your interest! I'd like to see them here, how about you guys? And finally for today, this is a new find for me, but we have mentioned this group on here before. In May, you may remember us talking about Sault Ste. Marie's own musicians union, The American Federation of Musicians, Local 276. When browsing links the other day, I found out that they actually have an official website! It mentions that one of the bands who is members of Local 276 is Woods of Ypres, though it doesn't name drop any other metal bands as members. The site is descirptive in talking about Local 276's history, why you should join, and all the benefits that becoming unionized can offer. This can go from playing in the United States to recording to even helping fill in for other musicians, there are many benefits to getting your band into the AFM! Definitely consider joining this union if you're in a local band, it could pay off in the future! Click here for details on how to join! Also, note that one of the executive board members is veteran local musician Ric Datson, now best known as the drummer for That's Chester!

That's all for today, but I'll see you guys TONIGHT at The Oddfellows Hall! Thanks everyone!b
Posted by The Sault Metal Scene at 3:51 PM