LOCAL CONCERT ALERTS (Who Made Who, Turner Up, And 5150), Plus Hempfest & Lion Ride News!!

Our busy 2011 continues with today's news post, our 18th already this year! Enclosed in today's post are the latest concert photos from a recent major show, the newest bands on this year's Hempfest, and kicking things off, FOUR LOCAL CONCERT ALERTS!! So here's what you need to know, and check out our latest Defunct Local Band Profile on Nite Wülfe in the post below this one!

We'll go in chronological order for the new shows, starting with one THIS FRIDAY at The Canadian Nightclub! Just a few days after I told you guys that they'd be at Hempfest this year, Ontario-based AC/DC tribute band Who Made Who will return to Sault Ste. Marie for a night of high voltage rock n' roll on Friday night! Apologies for the relative short notice, the band didn't announce it on their pages, and the Facebook event page wasn't posted until the other day. It's great to see Who Made Who back in town, as they're no strangers to Sault Ste. Marie, and they have a very faithful AC/DC sound going for them! So they'll be back at The Canadian on Friday night at 10:00 PM, there will be a $5 cover charge, and you must be 19 to attend. I dunno if I'll be able to make this concert, but when I saw them in 2009, they impressed and entertained, and who doesn't love a night full of AC/DC classics? Check the above links for more details, and stay tuned for additional news if it comes in!

Speaking of shows this weekend, a local classic hard rock band return to the stage for another weekend of music! That band would be Turner Up, fresh off their well received weekend set at The Rockstar Bar, as they now head to the west end for shows THIS FRIDAY AND SATURDAY at The Roosevelt Hotel! Again, apologies for the short notice, these were only just announced last night on The Rosie's Facebook page. Like other Turner Up shows, I'd expect both of these to have 19+ age limits, no cover charge, and start times of after 10:00 PM. Check the above links for more details on these shows! Nice to see Turner Up back in the swing of things in 2011, and they'll have a nice mix of classic and newer songs that get heavier as the night gets longer! And, these fill out a nice three day stretch of concerts following Thursday's metal night, so make note of that as well! Stay tuned for more on these and the Who Made Who show as the week continues!

Our final new show tonight is another tribute band making their way to The Canadian Nightclub, but in this case, we have some extra notice. This time around, the tribute band is 5150: The Canadian Tribute To Van Halen, a Toronto based band who will be sure to deliver some great Van Halen classics from both the David Lee Roth and Sammy Hagar eras on February 19th! The band features members of other notable tribute bands who've played here, like Gunz N' FN' Rosez and Second Coming, so there's talent to be had! I don't think the vocals are a complete match to either David or Sammy, but frontman Steve Stanley can pull it all off very well, so fans of either Van Halen era should be happy! The above link to their website and their Facebook page are my sources for this show. An event page isn't online for me to get definite information on the house rules, but I'd assume this has a 10:00 PM start time, a 19+ age limit, and a cover charge of around $5, probably similarly to the Who Made Who concert on Friday. February 19th is shaping up to be a surprisingly big night of music, with 5150, Maximum RNR, and As It Stands all playing separate shows that night, so definitely circle this date on your calendars! I'll keep you posted when more comes in!

Fourthly tonight, here's the latest lineup news from Hempfest, which returns to it's original home in nearby Ophir, Ontario from August 25th-28th! Three more bands are now on the lineup for this year, adding up to 12 in total now confirmed, and one of these will interest hard rock fans! Actually, this is a band we've covered on here a bit in the past. That band is London hard rock trio Violet Fuse, who feature Sault Ontario native Thom Edwards on drums! We covered them in our Saultites In Out Of Town Bands Profile in June, and they have a nice mix of classic and modern sounds in their original material, so they should fit right in in their first stop in the Sault area! Two more bands have been added to the Hempfest lineup, those being Hamilton ska punk band Lo-Fi and Blind River solo folk artist T.J. Kirby, so click on the links to give them a look as well! These bands join the previously confirmed Frightlight, Half Past, Who Made Who, Misery, 4Ward, The Killin' Time Band, Northern Lights, Scott Huckabay, and Josh Odair on the Hempfest lineup, which promoter Robert Neron says is now full. Good solid lineup, but as always, if something changes, I'll let you know! Check the above links for Hempfest updates and to check out all the confirmed bands! 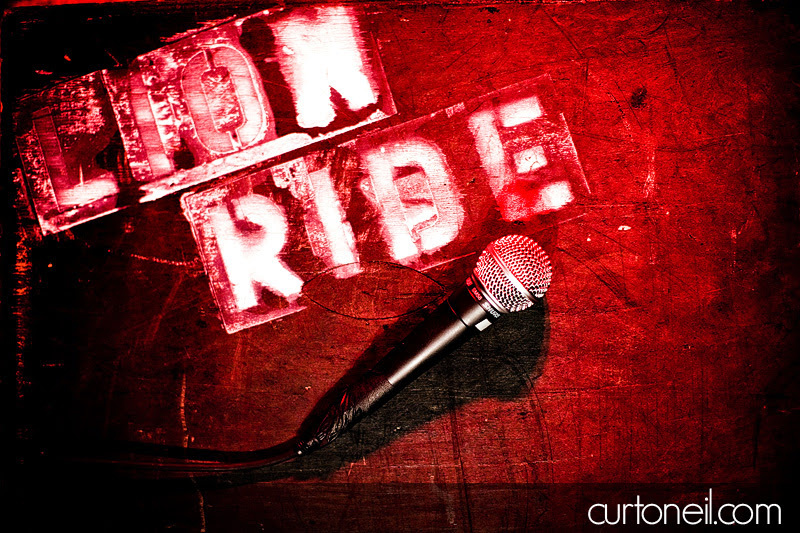 And finally for today, a ton of new concert photos from local photographer Curt O'Neil from last month's packed Lion Ride concert at The Canadian Nightclub are now online! Preview shots of each band member were originally posted on Curt's website two weeks ago, but he uploaded plenty more this afternoon, and you can check them all out at this location! Great work as always, and though this photo isn't of the band themselves, I'm just trying to entice you to click the above links and give Curt some well deserved traffic! Plenty of photos of each band member from all different angles are posted, and they're all of outstanding quality! Curt should do more concert photography work, he's very good at it! Definitely check out the above links for more, and remember, there are more concert photos to come, as Donna Hopper of SooToday was there snapping photos as well, so stay tuned for those soon as well, hopefully! I'll keep you posted when her shots come in, along with any more Lion Ride news!

That's all for tonight, but stay tuned for more news and notes very soon, including last month's poll results and this month's new poll tomorrow! Stay tuned!
Posted by The Sault Metal Scene at 11:04 PM

Hey Dude, thanks for the plug! Live bands is where I got my start but barely get out anymore for it. Lion Ride is one of the few who I still go out and frequently shoot when I can.

Hey it's no problem at all! You should hit some more when possible, your work is great!