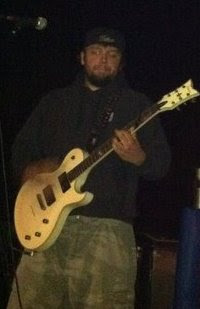 Channel Summary: This is the official YouTube channel from Sault Michigan metal guitarist Scott Savoie. Launched last year, the channel mostly serves to showcase Scott's solo work, usually centered around short original guitar pieces and experimentation. These include a video of a tapping riff & guitar solo, a 30 second arpeggio performance, and a solo classical-ish original, among other longer & more viewed videos. His channel also includes covers, including of Lamb of God's "Hourglass", Periphery's "New Groove", and a Canada-exclusive cover of Devildriver's "Not All Who Wander Are Lost". No clips of him in concert or with his bands are posted yet on Scott's channel, but as it is currently in active use, anything's possible!

Why Should You Watch: Because Scott is a very talented guitarist with some clear skill and songwriting ability, and his solo work deserves notice! It's always good to see local musicians show their skill like this, and Scott definitely has a lot of cool and proficient guitar work to show to the world! He still actively uses his channel and posts videos to it, so I definitely recommend subscribing, but note that nothing of his old bands has been posted there, so if you're expecting live/band videos, they won't be there (at least not yet.)

Random shred on a solo-6 atx: Scott's oldest and most popular video has received over 4,200 views since it's upload last year, even though it was mostly filmed so he could try out his new Schecter Solo-6 Blackjack ATX guitar. Just 70 seconds long, it still has some really cool guitar shredding and soloing, and it's a nice sampling of Scott's talent as a guitarist!

protest the hero-spoils-cover: The first of four covers on Scott's channel, this solo rendition of Protest The Hero's "Spoils" was uploaded last July. I'm not a scholar of Protest The Hero's work, but Scott definitely knows this song really well, and you can hear his playing over the original backing track without it being too overpowering. Solid work as usual, and watch out for a cameo appearance by Scott's Swayze Train bandmate Mike Libertoski late in the video!

building a reflection: This video is of Scott's solo original piece "Building A Reflection", which he wrote using help from his Line 6 Pod HD500 amp modeller. It's a work in progress, but it's well composed and has a nice progressive metal-intro feel, though it can get repetitive. It's a really nice change of pace from typical blistering metal stuff, and it's definitely worth checking out on it's own merits!