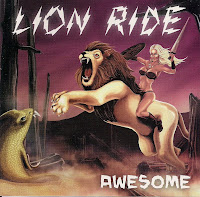 As promised, it's the newest installment of the Local CD Review series at the SMS, and this month, I'm going to take a look at the only released EP from defunct Sault Ontario metal quintet Lion Ride! Entitled "Awesome", it was independently released on July 19th, 2008, producedby Tom Treumuth, recorded at Catherine North Studios in Hamilton, and later mixed and mastered in Toronto. It features the band's original lineup, including Mikey Hawdon (a.k.a. Mikey Lion) on vocals, Marco Pedalino (a.k.a. Marco Lion) on lead guitar, and Mark Rand (a.k.a. Marky Lion) on rhythm guitar and backing vocals, along with original bassist Nathan "Lionel Itchy" Sauve & original drummer Marc "The Italian Stallion" Muto. As well, Marky's girlfriend Tracy Ashenden supplied backing vocals on two tracks. The EP is now out of print, but copies can still scatteredly be found at local music stores, and it is available on iTunes for just under $6, so pick it up there and support the guys! I believe "Awesome" is also available on torrent sites and similar free sources if you know where to look. Let's kick off the review with the opening song, "Trust"! (Updated on September 28th, 2012)

"Trust" has, in my personal opinion, been my favourite song by these guys, even before buying the disc! Maybe cause it's so catchy, it's very easy to headbang to! It's a great example of a song that can appeal to both metal and punk fans, it's heavy and has metal riffs, but frontman Mikey Lion's vocal abilities definitely draw more from a punk style, and this continues throughout the album! Traditional song structure, but it's very easy to sing along with and dance to! All the other members of the band sound real good, nothing truly "pops" out, so to speak, but it's very tight and well played all around. Great song and a great opener for the EP!

Next is "Cocaine Crazy", which is also a good song! Slower vocals from Mikey Lion, but the rest of the band keep up the same pace from the last song! They're very good at keeping a heavy, yet catchy pace with their songs! I can't help but wanna headbang to this song, and particularly the end of the song is good to yell along with! Solid heavier ending as well to another good song! This is followed by "Lock Me In", which reminds me a bit of "Trust" in it's overall sound. I really like the bass in this song, Itch plays well and even gets a bit of solo time later in the song, which is cool to hear! Everything's solid once again, there isn't a lot of musical diversity to speak of song-to-song, but Lion Ride know what sound they're best at, and they use it to their full advantage!

Afterwards, we have "Slapdance", which is the shortest song on the album, and also the fastest! The song definitely displays more of an angrier side, even though the song appears to be about a stripper! This is by far the most mosh-worthy song on the disc, and after "Trust", it's my favourite track! Also, if you're looking for a guitar solo, this song has the best one. Not sure which guitarist is doing the honors, but it sounds awesome! Ending was kinda sudden, but no biggie, this song's awesome! A cool drum and bass intro begins the next song, "I'm A Drug". I think this is my least favourite of the songs on the EP, though it's still a good song. It just doesn't have the "punch" to it that the other tracks have. Good groove to it all, and a nice guitar solo, but it seems a bit slower placed and it doesn't pull me in as much. It's definitely better live, but studio, something's missing. That's just me though. The EP closes with "Sneak Attack", which sees a return to the catchiness of the earlier songs! I love the guitar work on this song (nice work by Marky Lion and Marc O'Lion throughout), and the music is at top form! Another great example of a party song that will get any crowd moving, and a nice closer to the album! Not a lot new to say about it, but that's Lion Ride's strength, punk/metal songs that anyone can groove to.

While there won't be any Gates of Winter-level technical stuff here, they're a different band for a different crowd, and they're awesome at what they do! The EP's title accurately describes my thoughts of it: Awesome! While these generally aren't the best songs to mosh to ("Slapdance" notwithstanding), you will definitely love the songs on the EP, and live, you'll be partying and having a good time! Though "I'm A Drug" didn't attract me as much, the EP was still consistently good. Nothing groundbreakingly different, but extremely fun and solid throughout! Go check them out on MySpace right now, and if they're back in the Soo in the next while, GO SEE THEM!!!

(P.S., speaking as a fan here, huge kudos to Lion Ride for putting the lyrics in the booklet! Now I can sing along without saying incorrect words and looking like a moron!)

So that was this month's review! Next month, I am planning on reviewing Sykotyk Rampage's new album IF it's released. I have backup plans in mind just in case, so if nothing's imminent by later in September, I'll tell you guys what I will be reviewing instead! And no, it WON'T be Lux Aeterna (too soon for another Gates review) or any old Woods of Ypres albums (I'm reviewing the new album in October, be patient.) Stay tuned for more on that, and there will be more local metal news here in the next couple days! Thanks everyone!
Posted by The Sault Metal Scene at 3:02 PM

I recently came accross your blog and have been reading along. I thought I would leave my first comment. I dont know what to say except that I have enjoyed reading. Nice blog. I will keep visiting this blog very often.