Half A Man News And The Winner Of March Mayhem!

In our final post for this Saturday three-for-all, we have three aims: Preview a concert tomorrow night, update you guys on some recording plans from that band, and unveil the winner of our March Mayhem tournament! Before we preview tomorrow's concert, remember that the previously announced punk show at Foggy Notions tomorrow featuring Dancing With Paris has been cancelled, but you can still see them at The Oddfellows Hall on May 28th, details of which you can find at this location! But there is still one metal show tomorrow, so here's what you need to know!

Brimley hard rockers Half A Man are back on the local stage tomorrow night for a special early concert at Golanka's Bar (The Bird)! Though the band have lots of great original hard rock in store for their fans tomorrow, there's a lot more going on than just their set. This show will serve as an afterparty for a softball team's opening game, though I'm not sure of the specifics. I'd guess it's either a Bird-sponsored team, a team made of Bird employees, or has band members or family/friends on the team. Aside from that, I have heard that Half A Man have giveaways planned for free band merchandise, and the people behind the upcoming "Yooper Bars" book will officially be on hand to gather photos and info on The Bird for their book, so if you want to make a cameo in the book or talk about The Bird, there's some added incentive! This show has a special early start time of 7:30 PM, you must be 21 to attend, and there is no cover charge. For more details, visit the official Facebook event page! There's a lot going on tomorrow evening, but remember to be there for Half A Man's set, as their hard hitting music is making a fast rise in the local scene, so they'll be on the top of their game! For a preview, here's Half A Man playing their song "Drunk" at The Bird in February!

Also, I wanted to add that Half A Man announced on their Facebook page last month that they've unveiled their official plans to record a full length album this summer! They're planning to hit McNally Smith Studios in St. Paul, Minnesota in June to record the album, with a hoped release date for late 2011. The band also noted that they could get former Machine Head/Soulfly guitarist Logan Mader to mix and master the album, presumably through his production team Dirty Mind Productions, but nothing is concrete. Click here for full details! Intriguing news overall, I hope everything falls into place, and I'll absolutely pick the album up when it comes out!

And now, here's the conclusion to the SMS March Mayhem tournament! So, who won the tournament, and how does the final bracket look? The results are below! 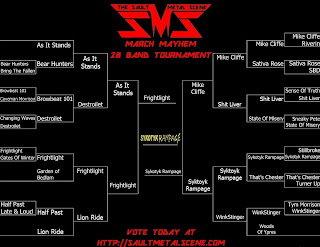 Congratulations to Sykotyk Rampage, the winners of the March Mayhem tournament! The local "blue Chinese metal crash punk" quartet took a surprising 207-83 win over Frightlight in the last week of voting to claim 1st place in this tournament! This was definitely a surprising result in both vote totals and pre-final round predictions, but Sykotyk Rampage did good to win all 5 matchups they were placed in! What does this all mean though? In terms of the spoils for the winner, it's just bragging rights, as the tournament was all basically an experiment in good faith. Some could point to band member-run voting campaigns for some of the results, but to me, it's just indicative of their devoted fan base rallying together! The results are interesting overall though, providing some interesting insights into some band's fan bases and how they can surprise you when the votes come in! Will we do this again, possibly with Sault Michigan bands? I don't know. I won't do one right away, as I do want to get back to some old school polls on the SMS over the next few months, but if I do do another, you guys will get lots of advance word, and it'll hopefully get an even bigger response! So congratulations to Sykotyk Rampage again, and here's hoping you guys enjoyed the tournament on the whole!

That's all for today, but stay tuned tomorrow, as I have a "surprise" post to share tomorrow to help make up for the delays the other day. What's the surprise? Well, if you see me at The Canadian Nightclub tonight, that could be a hint. Thanks everyone!
Posted by The Sault Metal Scene at 9:38 PM