Woods Of Ypres Videos & Updates From Their Current Tour!!

Its time to update you Woods of Ypres fans with another post all about our local blackened doom quartet! As their North American "Pain & Piss" continues, I thought it was fitting to devote this post to updates from said tour, including their latest tour vlogs & blogs, a new concert video, and come concert reviews & photos! With that said, let's begin today's post!

Woods of Ypres' two most recent tour vlogs are now online at frontman David Gold's YouTube channel, so here's what you should know! Part 2 details their run through the American midwest, including their pre-drive rehearsal in Philadelphia (the Madden brothers' hometown), the "convenient" site of their dinner/band meeting, some nice highway drive footage, the trials of filling their flat tire on the way to Detroit, the interesting basement of their Chicago venue, an opening band from the under-attended Des Moines, Iowa concert playing an "unexpected" instrument, and the wait to actually see it in action! This second part of the vlog has NO Woods of Ypres concert footage though, so keep that in mind, but it's entertaining (especially the end!) If you want new videos of Woods of Ypres on stage, that's what Part 3 starts with, so hopefully that works! This part also includes some highway footage, the incredible rain in Illinois, an opening band from the Des Moines show playing a song with "odd" lyrics, and some insight into the turnout for that show. Part 2 has more entertaining tour happenings, but Part 3 has more concert footage, so make note of what each one has, but both are worth your time! Check the above links for more, and Part 3, but here's Part 2 of the tour vlog!

Also for new videos is a new clip of the band performing a song, but not all from one show! This is of Woods of Ypres playing their "Woods I" original "The Sea Of Immeasurable Loss", which was absent from their setlists in the "Woods IV" release tour, but is back where it belongs now! The catch here is that they cull the footage from multiple sources, including their concerts in Delaware, New York, and Massachusetts, and the piano performance of the song that Joel Violette played from the first part of this tour vlog! I find the piano clips slow everything down a bit, especially when they're not live on stage, but it's still a quality video that has the band in top form on all three of the included concerts! Check the video out below for some classic Woods of Ypres!

Now onto the print and photo side of things from the tour, and first, remember when bassist Shane Madden had a tour diary on Decibel Magazine's website for their summer tour last year? He's back at it with what's now termed a "tour blog" for this tour, only now on the amusing metal news site Metal Sucks! In what he terms as "The Manifesto", part 1 of his tour blog details the first chunk of the "Pain & Piss" tour, including the long drives, assorted tour happenings and quotes, and more! It's oddly written compared to his diary on Decibel Magazine's site, but it's thoughtfully written at the same time, so give it a look at this location! Also, a review of the band's concert in Worcester, Massachusetts is now online on the metal website Metal Storm, so click here to check it out! Their set only gets brief comments, but it's called "solid" with "discordant yet pleasing" combos, and the reviewer seemed to enjoy them! Also check the review out for remarks on the other bands, including headliners November's Doom! 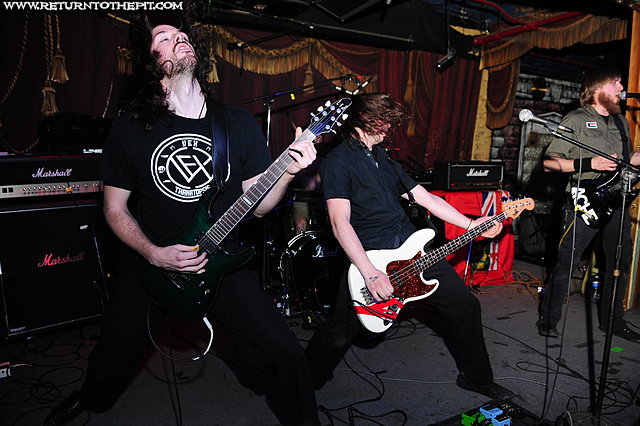 We'll close with new photos from their shows, and actually, there's 7 photos of Woods of Ypres (well, 3/4s of them) at the Metal Storm review linked above, so check them out! Nice quality, though they are all black and white, and drummer Evan Madden's not included in the photos. Good shots though! If you're craving colour photos, or pictures with Evan visible, I have you covered, as 130 PHOTOS from the Worcester show are now visible at this location! Taken for the metal website Return To The Pit, these photos are great as well, and there's plenty of each band member at many angles, so check them out! That's about all for today, but stay tuned for my review of TONIGHT'S Roosevelt Hotel metal night, and I will see you guys there very soon! Thanks everyone!
Posted by The Sault Metal Scene at 8:57 PM