I'm home! Great to be back in the Soo, on my normal computer, with no exams or Internet Explorer issues to get in the way! Today's post has news on the guitarist situation in two local bands, a possible show that was in need of a booking, and a new sound company, but first, here's some LOCAL CONCERT ALERTS!! (Updated: 2:18 PM Wednesday)

Fresh off of the announcement of their local return, hard rock cover trio Caveman Morrison have announced three more concerts for this summer! Firstly, the band will return to The Nicolet Tavern on June 10th & 11th, one month after their live return at The Nic THIS WEEKEND! Then on July 8th, the band will be among the performers at this year's Goulais River Community Day at what I believe is the McMeeken Centre on Goulais Avenue, though it's only credied as the "Goulais Community Rink" (let me know if I'm wrong!) The Community Day itself is a yearly event with all kinds of fun family activities and events, and bands play each year, though I'm not sure who all else is playing. I'll tell you if I find out! The band has a 9:00 PM start time listed for July 8th, while the Nicolet shows next month start at 10:00 PM. None of the above concerts have announced entrance fees, and while the Nicolet shows are 19+, I'd assume the Goulais River Community Day set would be all ages. For more details, click here for the Nicolet event page and here for the event page for Community Day! Nice to see Caveman Morrison piling on the bookings following their return, here's hoping there's more on the way! Stay tuned for more as news comes in!

Secondly, here's some video footage I'm VERY surprised we haven't seen until now! As you're likely to remember, local hard rockers Garden of Bedlam opened for Kiss (both bands on your right) at The Essar Center in August. That was a huge story for both Garden of Bedlam and the local scene last year, but for over 8 months, publically viewable video footage never popped up online...until now! You may have seen Rick Dellavedova from CML Productions filming the band at a few of their concerts for use in music videos and related projects, and now he has a new YouTube channel which features some cool locally-relevant videos, including one video from the Kiss show! Uploaded onto YouTube on Saturday, this is of Garden of Bedlam playing their song "New Rain", and it looks and sounds good! Nice video quality, the band look good up on the big stage, and the crowd (or who was there that early) seem very entertained! It's great to finally see some video from their biggest show so far, definitely check out Garden of Bedlam playing "New Rain" at The Essar Center below, and stay tuned for some more videos Rick uploaded!

(Note that the original video was removed in favour of a black and white version for unknown reasons, which I re-embedded below!)

Next up, remember on Saturday when we discussed the guitarist departures in two local death metal bands? Well, both situations appear to be resolved, so here's what you need to know! Firstly, The Bear Hunters have announced the addition of Bring The Fallen frontman Josh Stephney to the band as their new rhythm guitarist, replacing Mike Vincent. Josh got the gig through the auditions on Saturday, and has been officially confirmed as the band's newest member on their Facebook page. Josh is of course best known as Bring The Fallen's singer from their 2009 inception through their breakup last month, but many of you know that Josh plays the guitar as well, and you may have seen him join in on guitar occasionally at Bring The Fallen shows. He has the skill to play guitar full time, and The Bear Hunters know talent when they hear it, so Josh should do great, and you gotta figure his growling skills will come in handy if need be! The Bear Hunters are planning to spend May rehearsing and preparing for a relaunch in June, so look out for Josh's debut with the band next month! Sounds good to me, I'll be waiting! 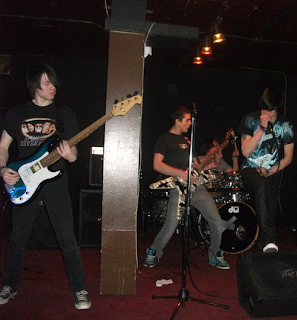 Also in guitarist moves, State of Misery's new lineup configuration has been announced. As newly posted on their Facebook group, the band have quietly updated their lineup to reflect that they are becoming a quartet again. According to the updated lineup, Kevin D'Orazio will move from rhythm guitar to lead guitar in the band, replacing Ray Cowan. As a result, frontman Steve Rhodes will take over on rhythm guitar in addition to singing. This should be interesting to see if it holds together! I knew Steve as a guitarist before I knew about his vocal work, so he should handle this part of the band well, hopefully he can do great on both roles at once! As for Kevin on lead guitar, I'll be curious to see how he compares to Ray, but I do think the band know what they're doing concerning their sound and members! Things could change before their return, still likely a ways off, but I will keep you posted! I've seen a number of postings and statements from the last little while that didn't suggest much optimism for the band's status, but hopefully everything pulls together, and they'll be rocking the scene once again very soon! Stay tuned for updates as I hear them!

Finally, how's about a possible concert that needs a booking? Here's what you fans and prospective bookers need to know! Last week, I received an e-mail from Brendan Doll, the guitarist for the Calgary experimental hardcore band The Promethean Labyrinth. He's looking to book a concert in Sault Ontario on Saturday, July 16th for both his band and fellow Alberta metal band Distant Calm, who are touring with them this summer. I sent Brendan some booker contact info, but I don't know if that will get anywhere, so as always, I'll let you guys know about this possible show! The Promethean Labyrinth are very heavy and have lots of progressive and experimental touches with their aggressive hardcore music, and they'd fit well here, while Distant Calm have a more mainstream with their sound, but they have a heavier sound and nice melodies! If you want to help The Promethean Labyrinth and Distant Calm play a show here in July, shoot Brendon a message at this location, check out both bands at the above links, and best of luck to the bands in getting a show here, it'd go over well!

That's all for now, but stay tuned for a new Woods of Ypres-centric post, our Destroilet EP review, and much more very soon! Thanks everyone!
Posted by The Sault Metal Scene at 3:04 PM