Hey guys, it's time for our latest concert review, as I was back at The Roosevelt Hotel last night for the sixteenth metal night, courtesy of Dismembertainment! I'll also include information on the demo given out by one of the bands last night as well, so keep an eye out for that, but let's begin with the actual concert review!

First was local hardcore quartet Changing Waves, making this the first time I've ever seen them at a venue other than The Oddfellows Hall. This actually is the longest set of theirs I've seen too, given that they didn't have to share the stage with as many bands, so they had lots of time to impress the crowd, and they sure did! They seem to be diversifying their sound more and more, and seem to be using a lot of influences and sounds into their brand of hardcore, which I welcome! Though the promising "Let's Try It Again" wasn't played, a punk-sounding track named "Jenny" with no screaming was on the setlist, which didn't sound too bad. Their hardcore songs like "Jung Jung", "Lockdown", and "Divine Intervention" got fans going, and their cover of System of a Down's "Suite-Pea" was well recieved! I was glad to see Benjamin Kallonen's stage presence improved to the point where he looked at the audience for the set, and luckily, his screaming was brutal & clear! Mike Hagerman was great on guitar, probably the best I've seen from him in Changing Waves, and Terrance Gomes was solid on bass, even when operating sans one string for the end of their set! Alex Hagerman kept the beat really well on drums also, no real complaints there! Good set, I see bright things if Changing Waves stay on this track!

Second were Sativa Rose, and if there was a local metal definition for "stealing the show", their picture would be beside it for last night! The classic metal quartet were rocking out on guitarist Anthony Orazietti's birthday, and he was on fire last night! Actually, so were the rest of the band, especially Andrew Angelic, who also tore things up on guitar on each song, with a seemingly permanent smile on his face throughout! Adam Veale's bass work was great too, and compimented each song, while Alex Palmer's drumming was as good as I expected! Their only glaring flaw was in vocals, an area where neither Adam nor Andrew excel, and to be honest, it does hurt vocal-intensive songs like their Iron Maiden covers. Their originals were in full force last night, with the 7 minute-plus "Bellows of the Beast" serving as a blistering guitar showcase that us fans ate up! Late in the set, Dismembertainment head Rich Moreland joined in on vocals for a cover of Pantera's "Cowboys From Hell" (with Bear Hunters singer Nik Deubel) & another new Sativa Rose original, which were cool! The vocals just blended together for the Pantera cover, but Rich sounded like a key part of Sativa Rose on the original, very brutal work! Awesome set from these guys, all they need now is a singer, and then, the sky's the limit!

...oh yeah, Sativa Rose are formally looking for a singer, as they publically announced last night, so if you or someone you know are interested, give the band a shout at their official Facebook page, cause you never know! They'll need someone really good though, given the songs they cover (everything from Gwar to Iron Maiden) and the style they employ, so keep that in mind. Best of luck, the guys deserve a great frontman (or woman? Who knows!)

Headlining were grimecore trio Shit Liver, in what's actually the third time I've seen them in the last two months, all at The Rosie! You'd think I'd be running out of things to say about them after seeing them so often this spring, but they had some new stuff to make note of! For one, there was no string breakage incidents, so their barrage of originals like "Shit Liver", "Friendly Old (Uncle Joe)", and "Contribute or Perish" was uninterrupted! Along with expected originals from bands like O.B.C.D., Macabre, and Dystopia, Shit Liver broke out some surprises, including a set-opening cover of Jimi Hendrix's "Foxy Lady" (imagine that with growling), the return of the MXC theme song, and in a cool surprise, a cover of Green Jelly's "The Three Little Pigs" featuring Rich Moreland on vocals, and 2/3rds of the band (Josh Penno & Matt Baic) switching instruments! Not a bad cover, and interesting to hear in a death metal style! Funny song too, gotta love Green Jelly! On the whole, Shit Liver's crusty death metal sound really hasn't changed beyond the songs they add to their sets, but they got some moshing going and employed a relentless energetic (and Brava-fueled) assault onto the crowd, and they ate it up! Still a polarizing sound, but moshers wouldn't notice that anyway, so it's all good!

Solid night of metal last night, and it did me good to get out and enjoy myself after some recent personal disappointments. I'll be back on Monday for The Isosceles Project & Thekillingfield, and I hope to see you guys there! Yes, I got photos, so click here to check them out (or visit our Facebook page), and I also got videos! Here they are, Changing Waves' song "State of Emergency", Sativa Rose's lengthy original "Bellows of the Beast", and Shit Liver's cover of Dystopia's "Stress Builds Character"! 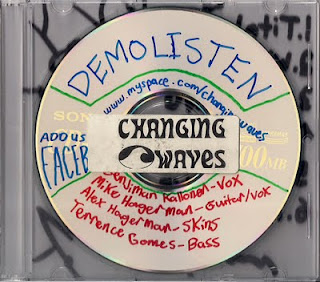 Finally for today, how about that demo from last night? Here's what you should know! After their set, Changing Waves singer Benjamin Kallonen handed out a free demo to fans in attendance, and yes, I have a copy! Entitled "Demolisten" (sounds like "demolition" on purpose, I assume), these were handburned with custom marker designs on each disc and jewel case, with only relevant information and a logo sticker carrying over on each. Mine has the track listing on the back, and everything else on the CD, but this varied depending on the CD & case. Now, because it's just a blank CD with drawn on information and designs, it doesn't really count as an official "release" for our purposes (it'd need proper labels and presentation), but the quality isn't too bad for the six songs ("Tital", "What's It Supposed To Do", "Jung Jung", "Jenny", "Lockdown", and "Away"), and their varying influences are on display here! Not bad at all, it's nice to have clearer versions of their originals, and for free, it's a great value! Keep an eye out at their next concert, as they could have more free copies of "Demolisten"!

That's all for now, but stay tuned for a new news post featuring a LOCAL CONCERT ALERT either tonight or tomorrow! Thanks everyone!
Posted by The Sault Metal Scene at 7:07 PM