LOCAL CONCERT ALERT (Half Past), The Isosceles Project Concert Preview, And Much More!!

One more news post before Victoria Day, and if you're home not camping or vacationing for the weekend, you can enjoy today's slate of news on The Sault Metal Scene, including new songs from a handful of local hard rock acts, some assorted stories from across the river, and a preview of a big metal concert taking place tomorrow night, but first, here's a LOCAL CONCERT ALERT!!

Local hard rockers Half Past are returning to the stage in July! The band will make their long awaited debut with new singer Jordan Rains when they return to The Rockstar Bar on July 23rd for what should be an interesting return show! This will be their first concert appearance in five months, following their return from a lengthy hiatus in February, in what would also be their last concert with then-frontman Luke LeBlanc. Though hinted at without a concrete public date late in a post on their Facebook page last month, they've since quietly posted the show with date on their Reverbnation page, and cause it's publically viewable, it looks official enough to call it. This show has a listed start time of 10:30 PM start time, it is a 19+ show, and a cover charge isn't listed. Check the above links for more details! It's great to see Half Past getting back out there, and with this show and their sets at Hempfest lined up, here's hoping they'll be back in their rightful spot in the scene very soon! And yes, the curiosity about how Jordan will sound with Half Past will be in full force as well, but I have faith he'll do just fine! I should be at their July return, and stay tuned for updates as I hear them! 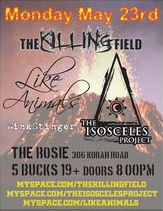 Now to a big concert preview, as Dismembertainment are bringing you another high quality package of metal tomorrow night at The Roosevelt Hotel! Three out of town bands are making their way here tomorrow, all of which are very familiar with the Soo, including headliners The Isosceles Project! Last seen locally in August at The Canadian Nightclub, this Toronto-based all-instrumental progressive metal trio will be sure to turn heads tomorrow night with their highly proficient and technical sounds! North Bay experimental metal trio Thekillingfield (who also played at that August concert mentioned above) are also scheduled for tomorrow night, with a highly brutal and relentless sound that will surely get us moshing! Toronto hardcore punk band The Endprogram are also on for tomorrow as a late replacement for Orillia metal band Like Animals, who dropped out for unexplained reasons. Also no strangers to Sault Ste. Marie, The Endprogram just headlined at Coch's Corner last month, and their punk-inspired hardcore attack will find lots of fans tomorrow! The local openers are extreme metal quintet WinkStinger, who'll look to unleash a bottle of fury on their fans just two weeks after opening for Fuck The Facts! Check the above links for more on each band playing tomorrow night!

Admission is $4 for this concert, and before you complain about the price, keep in mind that it's just a dollar a band, it's worth the money! Doors open at 9:00 PM with it likely starting not long after, and it's definitely a 19+ event. I should note that, at least as recently as Thursday, The Rosie was increasing security on checking ID, so make sure you have ID cards on you. For more details, visit the official Facebook event page! There's no better way to spend Victoria Day on the long weekend then by rocking out with 4 great bands at The Rosie, so I hope to see all you guys there tomorrow night! For a preview, here's The Isosceles Project playing their original "The Factory" from their 2008 live DVD!

Now, we have some new songs from a handful of local hard rock acts, and first, former Browbeat mainman Dutch Vanderploeg's new Training Snakes project has finally posted their first song! Posted on their Reverbnation page earlier this month, it's a solid hard rocker, though the production seems slightly off, and the drums don't sound all that clear. Dutch's voice seems impaired too, possibly due the vocal issues he had that helped cause Browbeat's demise earlier this year. I'd like to hear this song with some better production and possibly with a different singer, but I see a lot of promise with it, and check the above links to hear it! As well, local industrial project Riverin (featuring past & present members of Dirty Virgin) have posted a new song named "Trenches" onto their Reverbnation page! A slower and more deliberate song, Matt Hicks' vocals are getting more aggressive, and it still has some industrial flourishes to set it apart! Parts feel empty, but it has good pacing and would be a good addition to their EP if they opt to include it when it's released! Check the above links to hear "Trenches" and many more songs from Riverin!

Also for new songs, veteran local guitarist Mike Cliffe has three new songs on his Reverbnation page to mention as well! One's called "Cinderella Run", as inspired by my comments on his surprising semifinal run in our March Mayhem tournament, and it's a softer experimental guitar track with a dreamlike quality, though not skimping on some good guitar playing either! Not a whole lot to say on it, Mike's showing his impressive guitar range here! Also posted is a cover of Frank Zappa's songs "Wedding Dress" and "Handsome Cabin Boy", which has a more energetic bouncy pace fitting of a Zappa song like this, though it does go by too quickly! I like it, but if you're looking for heaviness, you'll wanna hear his other new song "Vote No To Elections", which has a hard charging riff, though it seems layered under some higher experimental sounds for much of the song. Pretty good though! Mike's varied work continues to impress, and if you check out his material at the above links, you're bound to find lots of stuff to enjoy, so check his work out at the above links, and watch out for more from him soon!

And finally for tonight, let's close with a trio of shorter stories from the last little while! As usual, these are in alphabetical order by band name:
That's all for tonight, but have a good Victoria Day, stay tuned for my Soo Stories review this week (along with more news), and I'll see you guys at The Rosie tomorrow night1 Thanks everyone!
Posted by The Sault Metal Scene at 11:38 PM