Keeping the news coming on this Wednesday afternoon, we have some assorted recent updates to touch on, mostly from Sault Ontario, so what have we got? New song uploads (both in an album format) from two very different bands, lineup additions for a large upcoming metal show, and much more, so read on below for what you need to know!

Replacement bands for THIS SATURDAY'S Sewer Swampstravaganza III have been announced to fill the spots vacated by Giwakwa and Winkstinger, so before we preview the full show in the next few days, let's give those some proper attention! Giwakwa's old 6:00 PM slot will surprisingly go to another out of town band (joining headliners Warsenal), as their replacements will be Toronto grindcore trio Goatface Killa, who will bring a noisy extreme sound to the table that grindcore and hardcore punk fans should take to, and this seems ripe for moshpits as well! Note that the band's Facebook page implies that locals Shit Liver are playing, but unless there's another lineup change that hasn't been announced, this is likely false (they didn't even play in the last two Swampstravaganzas.) Winkstinger's replacement at 4:00 PM is local solo musician James Watterworth in his second Oddfellows Hall appearance in under three weeks, and his considerable bass skills and easy going nature should be a solid addition to the afternoon lineup, so don't miss him!

Note also that the Facebook event page lists James under his alias Delusionair Lionhair, which he's namedropped when playing songs from that project live, though I didn't know he and Delusionair were one & the same in previous reviews of his shows. The rest of the lineup is unchanged for bands & performance order, so stay tuned for our extended preview of the third Swampstravaganza very soon! 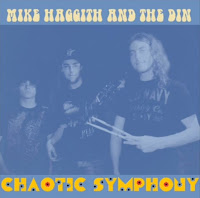 Next up, we have some new YouTube song uploads, starting with the second "album" from local hard rock/jam trio Mike Haggith & The Din! Entitled "Chaotic Symphony", this was uploaded as a YouTube playlist of 13 songs on Thursday, and it was apparently recorded at Paperclip Productions one week ago as part of a private concert for a small audience. The included songs are called "Luigi", "Journey" (#1 & #2), "Trip To Spain", "Luigi (Another One)", "The Dog", "Flow", "Journey #3", "I Am", "The Ballad of K2/K3", "Climbing The Vine", "Journey #4", and "Analog Palace", so click each link to check them out! If there's a paid release planned for "Chaotic Symphony", I haven't heard of it, but if you like Mike & The Din's previous solo work and live appearances, this should be appealing for it's looser take on Mike's solo sound, with some solid adaptations present! I'll have to hear more before I really judge, but the recording quality's good, check out the first song "Luigi" below, and stay tuned for more from Mike's next local music work!

Also in new song postings, local goregrind band Tomgrindy (featuring Crucify The Whore's Ringsnaps Gibson) has their "full album" uploaded to label Blood Shed Productions' YouTube channel on Sunday via two videos (links here & here), so if you're up for some goregrind originals, this is a prolific source! If you've heard Tomgrindy's past material uploads, it's more of the same, but there is a fuller sound compared to Ringsnaps' other projects that isn't as reliant on pig squeal vocals, and there is some promising lead guitar work to be found as well! Acquired taste still, but there is growth present, so check out the first half of Tomgrindy's "album" below!

Finally for today, here's three assorted shorter news stories from the last little while, and as usual, these are in alphabetical order by band or venue name:


That's all for today, but stay tuned for weekend concert previews and more in the coming days! Thanks everyone!
Posted by The Sault Metal Scene at 12:00 PM