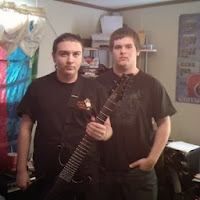 Members: (This information is incomplete concerning member T.J.'s last name. If you can fill in any blanks, e-mail me at robertfigures@outlook.com!)

Info/Analysis: A short lived Sault Michigan metal project that was only visibly active in February 2008, Deprecor was a melodic metal act inspired by bands like KoRn, Arch Enemy, Divine Heresy, and In Flames. Apparently launched due to Nathan & T.J. being bored, Deprecor released just one original demo named "Break" before falling inactive by the spring of that year. Both re-emerged in the longer lasted and more substantial metal band Analog Deficiency in 2009, though they've since broken up too, with Nathan focusing on his current cover band RamWagon as of 2013. With only one song, it's hard to tell just how far Deprecor could have went, but "Break" is a promising (if repetitive) start that has enough heaviness and solid recording quality to attract some notice! Nathan's guitar work is pretty good especially, but both he and T.J. outdid themselves in later metal projects. Still, Deprecor was an interesting early attempt at an original local metal band, and give "Break" a listen below!

Info/Analysis: Quite Frankly were a short lived local hard rock band that was active in the Sault Ontario area from mid-2009 through early 2010. Playing a mix of heavier-leaning covers of everyone from AC/DC to Journey, Quite Frankly played at venues like The Speak Easy during their brief run, along with sets at major events like The Dragon Boat Festival & a Sault Steelers game, among others. Official updates last came in November 2009 when they announced that former AtrophiA drummer Dustin Proulx would be filling in for Adam Pettenuzzo, but no shows followed before they fell inactive early the following year. Unique at the time as an SMS-coverable band with both a keyboardist and a female singer, Quite Frankly were a very talented sextet that delivered some solid performances in their brief run (especially thanks to Jack's skilled vocal range), and it's a shame that they're mostly not in active bands now, but hopefully that changes! Their only 4 surviving videos are at this link, including this cover of Coheed & Cambria's "Welcome Home", so give it a look below!