As promised, we have a news post today as well, and it mostly focuses on a planned EP release TOMORROW, but we also have related notes on a recent collaborator of theirs, and first, a LOCAL CONCERT ALERT! Check it all out below, and give a look at our post from this morning for last month's poll results and info on our newest poll on your favourite new local metal/hard rock bands of 2013!

Local/Toronto hardcore punk trio RedD Monkey will return home for the first time since August when they headline Heavy Winter, a Boxing Day concert at The Roosevelt Hotel on Thursday, December 26th! Their first appearance at The Rosie in well over a year, it'll be great to have this talented and creative band back up north to rock the Soo with their cello-infused originals! They'll be joined on Boxing Day by local power/classic metal quartet The Hydra's Teeth in just their second live concert appearance & their first ever stop at The Rosie, prominent local hard rock quartet The Suicide Kings in their first Rosie appearance since May, and local punk/metal quartet T-Rex Manning (in just their second concert in the last 7 months)! Nice selection of bands we haven't seen as much of lately, and there's a little something for most metal tastes, so certainly keep it in mind for Boxing Day! Promoter J.D. Pearce is seeking more bands, so if you're interested in playing at Heavy Winter, message him at this link.

Note as well that this is the ninth Thursday night concert at The Rosie that J.D. has promoted (and first in almost 5 months), so fans of the former Rosie metal nights may want to take note of that connection! Heavy Winter has a $5 cover charge, 19+ age limit, and 10:00 PM start time, and for more details, visit the official Facebook event page! The holiday season is usually very good for metal/hard rock shows, and this will be no exception, so stay tuned as more bands get added to Heavy Winter! 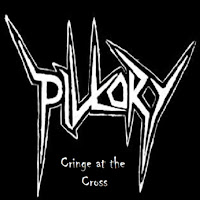 Next up, here's the latest on local thrash band Pillory's upcoming demo EP release and plans! TOMORROW'S planned release date for "Cringe at the Cross" is still a go, and to that effect, the band has released a photo showing a bunch of physical copies! This is roughly the official artwork (same as on the streaming YouTube copies), so plans for an out of town-commissioned cover must not have went through. According to recent indications, the EP will be on sale directly through Pillory via their Facebook page or through individual band members (likely for $5), so if you want one of the first copies, message the guys starting on Thursday! No word on if it will be sold on a digital format yet, and as for in-concert availability, posts from Sabrina Strange Productions have been fairly exciting! The former Chronic Demonic singer has begun collaborating with Pillory in the past week, and according to her production company's Facebook page, she's helping design t-shirts for the band, she hinted at a DVD and band stickers, and she also indicated that Pillory hope to be on 2014 concerts put on by Blood Shed Productions!

It's nice to hear about plans ramping up from Pillory (especially having only played 1 and a half concerts since their inception), and hopefully tomorrow's release is a great to way to honour the memory of founding guitarist Andres Duchesne one year after we lost him! In case there's nothing new to report on Thursday in terms of the release, I'll confirm right now that if it's not delayed, "Cringe at the Cross" will be our first CD review of 2014! We have this month still dedicated to The Strange Coyotes' digital album, hence why they're next month, but it should be very interesting, so watch out for our review of Pillory's EP next month! Lastly for Pillory updates, Sabrina also posted this jam session video onto her production company's Facebook page last week of members Robert Sartini & Bret Shuttleworth playing their song "Dethrone the Dictator", though it's instrumental, in black and white, only 51 seconds long, and doesn't feature Josh Amendola or Tyler St. Amour. It's still a solid quality video with the guys sounding great, so check it out below!

Finally for today, here's the latest relating to the aforementioned Sabrina "Strange" Lavoie! Since leaving Project Legion, we haven't heard a whole lot for firm musical plans from her, but she's recently been working on drumming under the tutelage of Pillory as a way to be more diverse for future band opportunities, with videos of her playing with Robert Sartini now on Facebook themselves! Joining a well done and short metal cover of Britney Spears' "Toxic" with her on vocals and guitar, the new drum videos are of her and Robert covering Avenged Sevenfold's "Unholy Confessions" and a longer clip embedded below! There's work to be done, but she's showing positive signs, and hopefully she keeps at it in the coming months, so check out her drumming work below, and stay tuned soon for another video she uploaded of Robert playing a solo cover!

That's all for today, but stay tuned for weekend concert previews tomorrow! Thanks everyone!
Posted by The Sault Metal Scene at 4:00 PM