Merry Christmas, everyone! (or, Happy Holidays if you prefer!) As has been a recent tradition, I've got some Christmas surprises for the occasion, but unlike last years, I've pared them down a bit and put them all on Christmas morning to both accentuate the day and note that there's less SMS-fitting albums at access to post online that aren't already there. For today, we have two archive metal albums to unwrap, along with a look at a fittingly seasonal local metal band, but first, we have a long overdue addition to our band links, just in time for Christmas!

First off today, we're finally welcoming Sault Ontario power trio Stiffler's Mom into our full coverage on the SMS! This was probably very overdue, but I think holding their current material and cover selection as being "lighter" than their old Sin Stereo work was an overstatement to say the least, as they still rock hard in concert! Last seen on stage at Docks Riverfront Grill last weekend, Stiffler's Mom is comprised of singer/drummer Greg Simpson (also of That's Chester, Bone Yard, and Maxx Entertainment), along with guitarist Michael Davies and bassist Jon Ferguson, who have played together (aside from a brief 2011-2012 breakup) since way back in 1998. Stiffler's Mom have played a number of big events during their run (including opening for INXS at The Essar Center), recorded at least one CD, and have been instrumental in the recent Toystock fundraiser concerts for Christmas Cheer, and their blend of old school covers (many with a heavier edge) are always a good time!

Though they're only just now getting full attention on the site, I've enjoyed Stiffler's Mom since even before the SMS was a thought in my mind, having seen them at a dance at Bawating Collegiate & Vocational School circa 2004. They're talented, have a lot of fun, and always engage the crowd, so hopefully we hear much more from Stiffler's Mom into 2014, and here they are pumping out heavier renditions of Johnny Cash and Golden Earring songs at last year's Toystock! 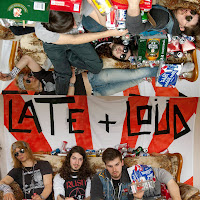 Next for our Christmas surprises, I uploaded two more local metal albums from the archives onto our YouTube channel, including defunct Sault Ontario classic metal quartet Late & Loud's only EP "Heavy Rockin' Hard Metal"! Originally independently released in November 2012 upon their return from their first breakup, the version I uploaded is actually the April 2013 "Still Hard" reissue, which featured two added songs and two re-recordings of the original pressing's bonus tracks, with much higher quality. Released prior to their last set at the Rockstar Bar Battle of the Bands, songs 1 & 6-9 were recorded at The Smoke & Oak Room with producer Dave Pihlaja, while the other 4 were produced by singer/guitarist Jonathan Tiberi's Daybreak Johnnies bandmate Steve Hopkin. Also featuring singer/guitarist Brendan Christie, bassist Benn Garside, and drummer Josh Hatherley, the songs (in order) include "Heavy or Bust", "Trouble", "Live For Excess", "Never Again", "Love Letter Lockdown", "Fast As A Bitch", "Machine Gun Maiden", "Whisper of the Damned", and "Rock N' Roll", so click each link to hear each song!

Note that I didn't include the self-recorded 2012 versions of "Never Again" & "Love Letter Lockdown" from the original pressing, and though I may post them in the future, they are of much lower quality. Late & Loud put in a fun album in both instances, though the lack of a full time singer still was felt, and it's a shame we only got recorded physical material of Late & Loud's at the end of their run. As they're currently inactive (and this EP's out of print), I thought "Heavy Rockin' Hard Metal" would be nice to have on YouTube in full, so check out the full album before, and here's the first song! 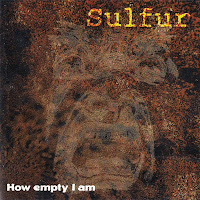 Lastly for "new" album uploads on YouTube is "How Empty I Am", the 1997 album from defunct local metal trio Sulfur! Purchased at Value Village earlier this year (lucky find), this 8 song EP was recorded locally at Satellite Sound Studios, with the featured lineup including singer/guitarist Andy Chillman, bassist Mike Bird, and drummer Derek Turner, who would all find greater success in the London metal band Papa Fogals Chair. In order, the album includes the songs "Flower Girl", "Side Walk", "Empty", "Monkey Spank", "Don't Be So Tamed", "Real Me", "Evaluate", and "Our Glass Universe", with a bonus track of scattered irreverent dialogue following the last song after an extended stretch of silence, so click each link to hear each song! 16 years after it was released, it's nice to hear Sulfur's recorded output, and they do remind me of a more alternative-based shift from the later PFC sound, which expanded in membership and aggression, but Sulfur should entertain fans for sure!

We have yet to review "How Empty I Am" on the site (due to the recent constant flow of new heavier album releases), but I hope to give it a formal look in 2014! Check out the full album above, and here's the first track!

Finally for today, I think it's more than fitting to take another look at arguably the most seasonal metal band in the Twin Saults, that being Sault Michigan classical metal outfit Theatre of Night! As you may remember, their first album was "Christmas Night", a 2010 collection of metal versions of carols and Christmas standards, though it has seen a 2011 re-release and plans for both a brand new version and a new all-original album, both with German soprano singer Gaby Koss providing lead vocals. Though recent fundraising campaigns and optimistic plans haven't found a public resolution yet, their older Christmas songs and select newer recordings with Gaby are online for streaming and purchase, so there's no better way to enjoy the season and local talent in equal measure! Coming off a partial live performance in Sault Michigan in July as well, Theatre of Night (featuring I.S.O.M. and End of Existence alumni) have a lot of talent and ambition, and hopefully their next big plans will be realized soon!

Buy and stream their material at their Reverbnation page, and also check out their YouTube channel for videos, songs, and slideshows for their Christmas, American patriotic, and general renditions and originals! Check out their most recent slideshow (featuring their version of "What Child Is This?" with Gaby on vocals) below, and have a wonderful Christmas night no matter what!

Once again, Merry Christmas to all, and I hope you guys get lots of family time, good food, and of course, lots of presents! We'll be back TOMORROW MORNING with previews of an intriguing slate of post-Christmas concerts with metal/hard rock bands, so watch out for that then! Thanks everyone!
Posted by The Sault Metal Scene at 1:25 AM