Happy President's/Family Day, depending on which side of the border you're on! Today's post on the SMS is loaded with some recent news and material from Sault Ontario, including a new album release and linked new solo video, and another new performance clip, but let's start with videos from last Tuesday's Big Wreck concert at The Machine Shop! While videos from this one are surprisingly scant on YouTube, Rock 101's Facebook page has things covered again, with videos of both of last week's bands being uploaded mid-show. One was of opening Winnipeg alt-rock trio Attica Riots playing their song "Misery" from a distant corner angle to the stage, and while it sounds good and lively for the genre, the vertical camera angle and stage setup don't help the view (at least the filmer zoomed in!) As for the headlining Toronto/Boston hard rock quartet, WSUE filmed Big Wreck playing "That Song" and, as embedded below, "Look What I Found", so how'd they turn out?

Both filmed from the back of the crowd section, these are again on a vertical camera angle, but the audio comes through fine, and it's nice to see both a single and a deep cut from "In Loving Memory Of..." filmed for Rock 101's page!  Give each clip a look above and below, and hopefully there's some more footage floating around from this show! 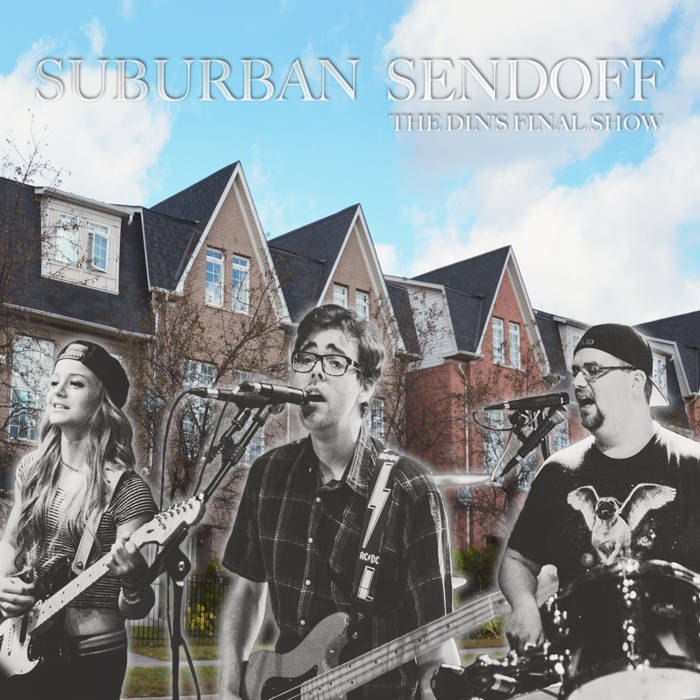 Next up, here's another new album release already for this still-young new year, as defunct local alternative hard rock trio The Din released their posthumous live album "Suburban Sendoff" to their Bandcamp page on Friday! They only announced the release date on Wednesday, so when they teased it was coming soon, they were true to their word! Recorded via soundboard audio at the album's eponymous farewell concert at LopLops Lounge on October 21st, this purportedly comprises of the entire concert's audio without edits, but as they noted in the description, "the human element is on full display." The extended 19 song setlist features every song from The Din's two studio albums, except for "The Rose", plus frontman Mike Haggith's old solo original "We Met At The Circus" (or "...As Surrogates".) In a mild surprise, they also left in the encore cover of The Tragically Hip's "Blow at High Dough", despite previously axing the four external covers from the Bandcamp release of "The Din Does Laundry" last year.

No word on if it's in continued tribute to Gord Downie, worth the copyright hassle to keep the set intact, or a combination therein, but it's welcome to see it make the final cut! "Suburban Sendoff" is available on a "name your price" model through Bandcamp, but consider paying an amount to support The Din's hard work, even after their breakup! With all of that said, when can you expect to see a review of "Suburban Sendoff" on the SMS? Honestly, with our self-imposed 6 month anti-bias buffer period between reviews of albums from the same act, it can't come until June at the earliest, as we just reviewed "Suburban Dream" in December, which was itself delayed a couple of months for similar reasons. That said, our album review schedule is set for the first half of the year (May aside), assuming nothing gets delayed! Also, there is new solo cover video from the aforementioned Mike Haggith from his current Thompson, Manitoba home base, so what should you know on it?

The first posting on his YouTube channel in almost two years, this is an acoustic cover of Stephen Stills' "Love The One You're With", and it's an entertaining cover of this folk classic, with the well-bearded Mike handling this with a light and optimistic air! Give it a look below, and check out his new Thompson pop rock band Between the Ditches!

Finally for today, here's a new video of local acoustic hard rock duo Rob Speers & Jesse Cook (a.k.a./p.k.a. The Kariokeheads) from their show at Room 21 on December 16th, as uploaded by the venue's Facebook page shortly afterward! However, the cover performed is not what you may expect, with the Elements bandmates playing a surprise unplugged version of Khia's "My Neck, My Back" alongside Rob's wife Christina (I think) on guest vocals, and Rob's Jack Spades bandmate Daniel Horton on guest guitar. I'll just say that everyone's got a sense of humour, and it's a nice casual performance, so give it a look if you want below!

That's all for today, but stay tuned for more news and updates on the site this week! Thanks everyone!
Posted by The Sault Metal Scene at 11:50 AM