Just to make sure we don't interfere with your Super Bowl plans, today's post is up well and early, so what's in this one? The return of the shorter items bumped from our second Thursday post, two new videos from local concerts last fall, and leading off, here's a LOCAL CONCERT ALERT!

Sudbury death/thrash metal band Archelon will make their long awaited return to Sault Ste. Marie with a headlining concert at The Rockstar Bar on Saturday, March 10th! Most recently noted on the SMS when they and locals Jack Spades toured Northern Ontario together in the fall, this will be Archelon's first set in the Soo since the Devil's Night show at The Oddfellows Hall in October 2014. This brutal Northern Ontario quintet should be easily welcomed back to the local stage next month, so welcome their aggressive and crushing originals back on March 10th! The aforementioned Jack Spades will return from last fall's tour as openers next month in their first live appearance of 2018, while debuting local classic metal quintet Re:Born will hit the stage for the first time ever as the night's advertised openers (though members did open for Archelon with Project 421 and The Revolution back in 2014.) How will Re:Born sound in their first live go-around? We'll find out next month!

Promoted by Jack Spades frontman J.D. Pearce in his first self-promoted event in four months, this 19+ concert has a $7 cover charge and a 10:00 PM start time, and while it is advertised as being upstairs at The Rockstar Bar, the extreme metal nature of the headliners is more akin to what would be held downstairs at The Algonquin Pub/Spin Nightclub, so keep that in mind if the show changes floors. This should be a great show for metalheads to help ring in the spring months with, so visit the official Facebook event page and the above links for current & future details! 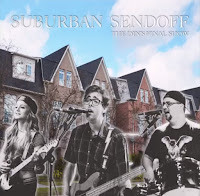 Next up, here's a new live audio track (albeit posted as a Facebook video) that I apologize for missing on the site for the past two weeks, namely the first official soundboard recording from The Din's farewell show last fall! Last month, the defunct local alternative hard rock trio announced that their posthumous live CD "Suburban Sendoff" (recorded at LopLops Lounge in October) is "finally ready to share", and they're starting with a few advance cuts to preview it's forthcoming full release. This is the cover artwork, obviously an adaptation of the front of their final studio album "Suburban Dream". The first preview track is actually their only cover from that night, aside from frontman Mike Haggith's prior solo material, namely their rendition of The Tragically Hip's "Blow At High Dough" from their encore. The Din weren't planning to cover any outside bands for their farewell, but as Gord Downie passed away just days out from the show, they added it into their set as a tribute, which was a nice gesture!

As a cover, will this make "Suburban Sendoff"? Given that The Din axed covers from the Bandcamp version of their debut live album "The Din Does Laundry", I can't see it, especially if Bandcamp is the primary sale location for this new live album, but I have been wrong before. In any event, this was a loving and welcomed tribute to Gord and The Hip at a time when fans would appreciate it the most, so give it a listen below, and stay tuned for more on the "Suburban Sendoff" live album as it rolls in!

Also today, here's the first video from local blues/hard rock trio Electric Church's new YouTube channel! Recorded at their set at Odeno at Sault College in September during their reunion celebration, I'm not sure why this performance of their song "Muddy Water" (no plural) took so long to hit the internet, but it's a cool way to launch their YouTube channel, so better late than never! Filmed on a stationary camera (albeit with minimal drift if you skip around), the audio's a little muffled, but Electric Church are in solid form from a nice camera angle, and hopefully we hear more from them live and in studio in 2018! Give their new video a look below!

Finally for today, here's three assorted shorter news items from the last while, and yes, these are the ones bumped from Thursday's second post. They're not going anywhere now! As usual for these short-form stories, these are in alphabetical order by artist or company name:


That's all for today, but stay tuned for more news and notes on the site in the coming days! Thanks everyone!
Posted by The Sault Metal Scene at 12:00 AM