Here is the third installment of our WLSO 90.1 FM retrospective series, which is relatively thin, but that's for good reason, as their website from 2004-2007 has the most substantive updates and longevity yet, so I want to give that ample time and attention in part 4. This installment looks at another interesting year for Lake Superior State University's college radio station, and while surviving info from The Internet Archive's Wayback Machine then isn't plentiful, we have enough material to touch on before things ramp up! Remember, to set the mood, tune in to LSSU's modern day internet station.

By October 2003, WLSO moved over to their best known and final URL, http://wlso.lssu.edu, though their initial variant with high & low bandwidth versions has not survived on The Wayback Machine. The earliest surviving (text-only) backup here comes from December 27th, 2003, though postings there indicate that it was still clearly a work in progress, and many updates were obviously geared toward station staff. The only schedule data here relates to three blocks credited solely to the DJ's names, though they apparently sponsored a post-game show by juggler Mad Chad Taylor on December 13th. Lorin Kozlowski's 2001-era rock show Fireball Music was still on by this point, and the guests page indicates that he interviewed Failure frontman and veteran producer/engineer Ken Andrews on December 4th. In any event, the version of the website ended updates after January 2004.

That same month, WLSO launched an official message board created through phpBB, and under it's original layout, copies of the forum were archived from March-July 2004, though none of the sub-forums or threads got the same.  That August, the message board received a heavy redesign with largely the same sub-forums, though logo/slogan contests launched that spring appear to have been cancelled, and a recently played music section was added, plus one for country music. The last surviving backup of the forum is from February 2005, and it was relaunched under a new host that fall. Unfortunately, no sub-forums in either layout have been backed up, but as of February 2005, there were 43 registered users and 545 postings, mainly in the miscellaneous section. Sub-forums existed for upcoming concerts, song requests, the website, and even a marketplace, while Vicious and Pauliophonic were the board's primary administrators.

On March 16th, 2004, wlso.lssu.edu was relaunched with another new layout, but highlighting the text is essential to read the black text on the black background. This era of the website was backed up numerous times through that fall, so click here to navigate the website during this year-long stretch, though not much is different. The front page updates mainly reflect website maintenance and DJ searches & training, but June 29th saw a bunch of short hard rock album reviews posted by staffer zero, with those CDs soon to be added to the rotation. Updates here did slow down over time, with no front page updates with this layout past September, and the schedule (again only listing DJ names) gradually shrunk as 2004 progressed. WLSO did maintain a chat room at this time that The Wayback Machine did try to archive (unsurprisingly, 0 people are in in the chat room right now.) This layout was tweaked and built upon for in time in October 2004, and would be regularly updated until early 2007. 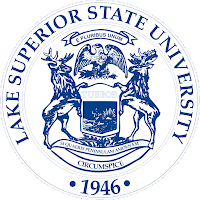 I wanted to close by jumping to the aforementioned October 2004 updates, as one fascinating addition to WLSO's website then was a page outlining the station's history from it's first 13 years in operation, though it was not updated beyond that month. A lot of it is technical details related to station equipment and licensing, but there is a lot of key information for old listeners. For one, the WLKR call sign was unofficial and was only used in their AM carrier current run, with the switch to WLSO necessitated due to an Ohio adult contemporary station already using WLKR. Plans were made to jump to FM as early as the fall of 1991, and they credit the spring 1998 purchase of a mobile DJ system as "where WLSO comes alive." The 2001-2002 school year saw the station boost their staff promotions and begin their original online stream, with official t-shirts and their first computer database beginning the next year. A paragraph about future aspirations was also included, and those mostly seemed to come true, if not beyond 2017.

Station history aside, we'll dive into the meat of WLSO's busy and well updated mid-2000s website in part 4 coming in the near future, so keep watch for that, plus more news on the site soon! Thanks everyone!
Posted by The Sault Metal Scene at 12:00 AM