Day #33 of consecutive posts on the SMS sees a little more in the way of news for a change, but we do have a bunch of videos to look at from some familiar local faces, including a live-stream, a single release, and a two man acoustic jam. Here's what you should know!

The summer concert season will be taking a major hit this year due to the coronavirus pandemic, as both Rotaryfest in July and the Fringe North International Theatre Festival in August have been postponed. Sault Ontario's summer festival (which hosts two music stages at Clergue Park) announced the news on their Facebook page this morning "out of concern for our wonderful community", and they will be monitoring Algoma Public Health and provincial government guidelines before announcing plans for the next installment. Fringe North had taken place in tandem with the Up The Arts music stage in the last couple of years, hence why that event is relevant for the SMS. Their SooToday press release is more up front about the challenges and reasons behind cancelling this year's festival, but they are committed to bringing it back for 2021. Sadly, there are probably more shoes to drop for the summer concert calendar locally, so what should you keep an eye on in this regard?

Other big concert festivals this summer that could very well be cancelled or postponed include The Northern Vibe Festival in Ophir, the Go North Music Festival in Richards Landing, The Sugar Island Music Festival, and the Rudyard Musicians Festival, and that's not even counting smaller events and traditional concerts expected in the months ahead. Time will tell what happens, but if Rotaryfest isn't happening this year, you know this is serious. When more details come to light, we'll keep you posted! 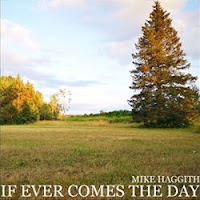 Next up, local/Thompson, Manitoba alt-hard rock solo musician Mike Haggith has unveiled the third and final advance single for his forthcoming studio album "If Ever Comes The Day", as you can now hear "MorningStar" in it's full studio splendour, courtesy of his YouTube channel this morning! Of course, I'll hold comment on the song pending our review of the CD (which may hit the site sooner than you expect), but I will say that there's more to this version than you've heard in Mike's acoustic videos. In a bit of a scoop, Mike asked me earlier today if I could reveal the rescheduled date for his planned "If Ever Comes The Day" release concert at LopLops Lounge on the site, so you heard it here first: Assuming that provincial health guidelines allow it, the show will now take place on Friday, November 6th, which also happens to be Mike's 29th birthday! If anything changes re: the venue, album, Mike's backing band, or admission, we'll let you know.

There is a long time to go before we know if concerts as we know them can go forward, let alone at nightclubs, but hopefully the curve will be flattened sufficiently by the fall. At least Mike has a backup plan in motion, and it'd be quite a way for him to celebrate his birthday, so fingers crossed everything works out! For now, give "MorningStar" a listen below, and look for his third live-streamed "#LockdownLive" concert tomorrow!

...The Animals' "House of the Rising Sun", Collective Soul's "Shine", The Travelling Wilburys' "Handle With Care", his own original song "Say That You Care", and finally, Extreme's "Hole Hearted". While Tym was using the lyric book from his first two Twitch live-streams here, the set is almost entirely different from what he played on Tuesday, so the variety is definitely welcomed, and his performances are as strong and musically varied as ever! Give Tym's new home concert a watch below, and stay tuned for the likely next installments on YouTube on Tuesday and Thursday!

Finally for today, here's a new video from local indie/punk band Northwest's Facebook page, and it's a social distance-friendly acoustic rendition of their original "Sorry Sunday" featuring frontman Wayne Watkins and guitarist Mike Yakasovich! After Wayne posted a couple of solo covers there, it's great to see one of their originals brought back for a video during the pandemic, though I have to be honest, his vocals seem a little overdone for an unplugged jam like this. Still a well done collaboration, and hopefully we hear more like this soon! Give it a look below!

That's all for today, but stay tuned for last month's poll results and our new poll on the site tomorrow! Thanks everyone!
Posted by The Sault Metal Scene at 2:29 PM