Hey guys, here's another news post finally, as I'm very backlogged with stories from the last little while due to my out of town excursion. I return home tonight, so all will be back to a more normalized schedule soon! First though, just a note on last night's Weak Ends-headlined punk/metal show at The Oddfellows Hall, as a seventh band was reportedly added on late notice to the lineup. That band is the Quebec punk/folk quartet Farler's Fury, who are touring with The Royal Red Brigade (also on last night's show) on their current trip across Canada. Promoter Mitch Sirie revealed the news on his personal Facebook page last night, which is my only source. Though not metal, they make great use of bagpipes for a nice Scottish punk flair, and I actually like them a bit better than The Mudmen on first listen, so check them out above, and I apologize for being late on mentioning them here! Now, to the news, including concert previews and first, battle of the bands results! 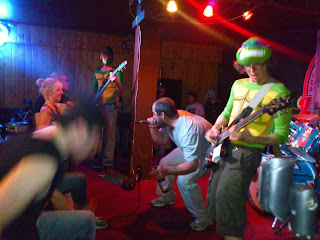 Local extreme metal quintet Winkstinger claimed victory in the Battle For The Blood on Tuesday night! The talented and entertaining local band won their first ever battle according to fan votes on Tuesday at The Roosevelt Hotel, and will now join The Bear Hunters as local openers for 3 Inches of Blood and Wretched at The Rosie on July 9th! Though fallout from the event hasn't been as large as I expected, I have learned a few things from what happened at the battle, so bear with me in case I'm missing something. According to For All That Is Lost frontman Tyler Sperry on the Facebook event page, the Desbarats death metal standouts finished second at this latest battle (an improvement on their third place tie at April's Humane Society battle), but a 3rd place finisher wasn't publically announced. The performance order, judging by photos from the event, saw Changing Waves open, followed by The Valentine's Day Massacre, F.A.T.I.L., and Winkstinger, and while I know they were slotted at random, hopefully the crowd's voting wasn't swayed by the performance order, as the later bands did place higher. As for promoter J.D. Pearce's punk band T-Rex Manning, they appear to have played after Winkstinger, but I'm not positive if they played during a voting process or after winners were announced.

With their victory, Winkstinger's Jesse Cook & Jonas Gasperas have added to their local battle successes, joining at least one prior victory with Soldiers of Misfortune and their 4th place win with Winkstinger predecessors Operation: Killdozer in 2009, which is nice to see! And the guys rocked out in style on Tuesday, with Jesse and bassist Ryan Sherman turning into Ninja Turtles for their set, which is a radical touch! Also note that guitarist Jason Ladouceur appears to have missed their battle set according to available photos, similarly to their Rosie concert two weeks ago. Whether his band status is in question or not is unknown to me, but if any public clarification can be made, I'll try and get it on the site! It sounds like the Battle For The Blood went off really well, and though the fan voting and lack of prizes beyond an opening concert slot were slightly concerning, it sounds like the event drew lots of fans and interest, and Winkstinger hopefully proved worthy of such a big opening opportunity next month! Congratulations to Winkstinger, and hopefully the next Sault Ontario battle is sooner rather than later, and at a time when I can be in attendance!

Now to concert previews, starting with a preview of TONIGHT'S 46th Roosevelt Hotel metal night! The third since the series' latest relaunch, there's definitely a contrast in terms of experience between the three bands on tonight's lineup, but a clear death metal theme is present, so here's who to watch out for! Headlining tonight are local grimecore notables Shit Liver (replacing the aforementioned F.A.T.I.L.), so if you missed them following their exit from Tuesday's battle of the bands, they'll be at The Rosie tonight to melt many a face! Death metal quintet The Bear Hunters will also grace the stage at the popular Korah Road bar once again for another set of brutal melodic originals and select covers, and you know that these bands (the two most frequent at Thursday metal nights) won't relent for one second with their heavy and explosive material! Opening tonight's show will be Desbarats death metal quartet Inhuman Methods, who'll be making a couple of firsts to open up this event. Not only will this be their first ever show at The Roosevelt Hotel, it will also be their first live gig with new singer Anthony Tverdal, who replaced Curtis Moir in the band in April. Though they still need a bassist, I'm curious to hear how Anthony does with Inhuman Methods, and if he can combine vocal prowess with better timing, he should contribute nicely going forward! As usual for all-local Rosie metal nights, TONIGHT'S show will have no cover charge and a start time of after 9:00 PM, while the 19+ age limit from recent weeks remains in place.
For more details, visit the official Facebook event page! This should be an interesting concert with lots of death metal brutality, so definitely consider hitting up The Rosie tonight to partake in this metal! Check the above links for more details, and for a preview, here's Shit Liver melting faces at the Rosie last month with their song "Shift Liver"!

Finally for Sault Ontario metal concert previews this weekend that I know of, a stacked lineup of young area metal bands will descend upon Laird, Ontario (about 45 minutes from here) TOMORROW NIGHT (after a day's postponement) for "A F.A.T.I.L. Gathering"! Battle For The Blood runners-up For All That Is Lost are hosting & headlining a special concert at 436 Neebish Road in Laird (bassist Ben Deslauriers' house) that goes above and beyond any house party-ish notions, including tons of bands, 50/50 draws, food and drinks, ALL AGES admission, and even the option to sleep over if you're too soused to drive home, so tents are welcome! Though the lineup isn't completely final and 100% detailed, here's the bands that I know are playing. Aside from headliners F.A.T.I.L., all three bands from tonight's Rosie metal night (The Bear Hunters, Inhuman Methods, and Shit Liver) will be a part, along with fellow battle participants Changing Waves and The Valentine's Day Massacre, and local metal quartet Borderline Divine in their third concert since their renaming, so that covers bands listed on the event page! As well, local/North Shore metal band Crimson Crusade indicated on their Facebook page on Sunday that they'd be playing as well, which would be their first public gig (outside of CASS & Ho Shin Sool events) since they too parted ways with singer Curtis Moir, but they haven't been confirmed for the lineup otherwise.

As well, the Facebook event page mentions "Others" among the performer lineup, but whether that just means Crimson Crusade or not isn't clear. If earlier event page postings and past similar show trends are indicators, than the "Others" may refer to a band or jam session made up of random musicians, similar to the one-off band Blood Messiah from last August's F.A.T.I.L. event in Thessalon. March Into Regression drummer Travis St. Amour indicated on the event page a few weeks back that a new band he was in were tentatively lined up to play, but whether he meant the former Bring The Misery or not isn't publically known. Even still, this is a great lineup of bands even on it's own, and even if we don't get a final band order, a surprise never hurt anyone! Admission is $10 at the door, everything starts at 5:00 PM tomorrow, and again, this is ALL AGES. Check the above links for more details! This sounds like an awesome concert with a unique atmosphere, and hopefully tons of people make it to Neebish Road in Laird tomorrow night to rock out with some of the area's finest young bands! I just hope the weather cooperates, but bring a tent or a chair or something, especially if you're sleeping overnight! See above for all current details, and for a preview, here's For All That Is Lost outdoors in the Soo in May!
That's all for now, but stay tuned for more news shortly, including Sault Michigan weekend concert previews (LemmaFest included), this month's YouTube Channel Profiles, and more! Thanks everyone!
Posted by The Sault Metal Scene at 2:54 AM