Battle For The Blood Updates, Ashes To Dust & Powerslug Videos, And Much More!!

After a day full of special feature posts, we're back to news on this warm Monday afternoon, so here's what's on tap! Today, we have details on hte next area battle of the bands (and what's changed), new videos from a young local band that play some heavier material, updates from a Sault Michigan hard rock band (and their first video footage, finally), some thoughts on a recently posted interview, and much more, so here's what you need to know!

The upcoming Battle for the Blood has been postponed one week, as per the Facebook event page. This latest local battle of the bands will now take place on Tuesday, June 19th at The Roosevelt Hotel, which confirms earlier word that promoters were looking to shift the battle's date to enable Desbarats death metal standouts For All That Is Lost to remain among the competing bands. Even still, the new date still has a missing band, as the previously announced Shit Liver were quietly removed from the lineup on Facebook around the time of the date change. A reason for the grimecore trio's withdrawal from the battle has not been publicized, but I wouldn't be surprised if scheduling conflicts played a part. It's disappointing to see Shit Liver out, but they'll be back melting faces soon! As a result, the battle now consists of just three bands (F.A.T.I.L., The Valentine's Day Massacre, and Winkstinger), and if this sticks without a replacement fourth competing band, it would make this the smallest Sault Ontario battle in recent memory. That said, battle promoter J.D. Pearce's local punk quartet T. Rex Manning will play "a special performance" at the battle, though out of competition, so if you enjoy their punk insanity, you'll get a kick out of their set!

Personally, I'd love to see another band added to replace Shit Liver among the competitors, as three bands seems awfully small for a battle of the bands, but even if none are sought, it'll still be a huge event on June 19th! Remember, the winners open for 3 Inches of Blood at The Rosie on July 9th, and with an extra week to prepare and get amped up, the postponed date for the battle can only help for attendance and advance word!

Next up, here's some new hard rock-relevant videos from young local rock band Ashes To Dust! The newer band of Superior Heights students have posted five more videos onto their YouTube channel, mostly from school performances, and though their sound and cover choices remain widely varied, there are a few heavier clips to mention! Along with an audio-only original named "Forgotten Lives" and an interesting cover of Kool & The Gang's "Celebration" (with many guest performers), the bulk of the new videos are from a set at the same stage from their earlier school concert clips, and they include covers of two Pink Floyd songs, Queen's "Another One Bites The Dust", and (as embedded below), Three Days Grace's "Animal I Have Become", so click the above links to give these new videos a look/listen! Ashes To Dust are definitely extending on their promise from their older videos, and the guys have talent for their ages (Alex Hemy's guitar work is standing out more & more), but Noah Morden needs to work on his higher notes when singing. Clean singing something in a low tone when it's meant to be high is a distraction to me. Still, there's definitely something there, so give their cover of "Animal I Have Become" a look below, see more at the above links, and don't miss Ashes To Dust at the second Sewer Swampstravaganza on July 13th!

Also today, here's some news relating to Sault Michigan hard rockers Powerslug! First, I can basically 100% confirm that they are currently a trio, so it looks like both singer Aaron Fasel and drummer Ivan Schliska left the band last summer around the time of the name change from River Witch. Without a band page to confirm said news, I was finally able to 100% conclude their current lineup (featuring guitarist Chris Gurnoe, bassist Chris Leask, and drummer Bob Helsten) based on this logo on Facebook featuring depictions of the three members as "power slugs". It's a shame that it took this long to verify all of the lineup alterations, but hey, it's better to find out late than never know! With that said, one glaring absence is in the form of media of Powerslug on stage, but the wait is finally over, as I've finally found a video from one of their concerts! A video from a rare out of town gig this past weekend at The Sand Bar in Ludington, Michigan (one hour north of Muskegon) surfaced yesterday thanks to Facebook user Munford Chef, and though it's not a very high quality video, it's at least a video, and that's something! (it's also cool to see them play a show in the Lower Peninsula!)

The video shows Chris Leask singing, and it's of them playing a song I swear I've heard before, but the video quality makes it hard for me to pick out lyrics. I think I'm hearing stuff about locking someone up and throwing away the key, but I may be wrong. The video was filmed off of a cell phone camera, which inexplicably turns in numerous directions when filming, and the audio quality is very scratchy, but any Powerslug video is better than none! I can't embed Facebook videos here, but click here to check it out, and stay tuned for more Powerslug news sooner or later!

Now, here's some assorted news stories from the last little while, and as always, these are in alphabetical order by band or artist name: 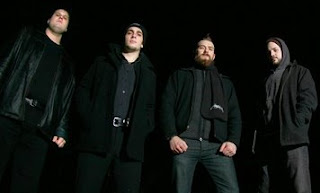 And finally for today, here's some analysis and thoughts on the second Woods of Ypres magazine interview that I posted on here yesterday, which came from the May 2009 issue of Windsor Arts & Music Monthly magazine. This interview was also very informative, especially from David Gold's lengthy reflections on his stint living in South Korea, which seemed to share it's own challenges and benefits compared to Canada. I was also interested by his thoughts on record labels, and his negativity on starting Krankenhaus Records in this day & age and releasing other bands' material, but he did a fine job of it! I don't know if Krankenhaus actually released that Vanquished album though, as I found very conflicting information as to what label it was released through. Also of note for differences: The title of Woods of Ypres' "best of" album later became "Independent Nature: 2002-2007", the Necramyth album only got a physical release when paired up with a limited run of "Woods IV", and the "yet unrevealed black metal project from Eastern Canada" was Thrawsunblat, featuring future Woods of Ypres guitarist Joel Violette. It's definitely an interesting interview, so check it out in the post below this one, and if I ever come across any more print David Gold interviews that aren't online, I'll find a way to get them out for you guys to read!

That's all for now, but stay tuned for more news this week, including possibly some news on a local concert venue's re-opening! Thanks everyone!
Posted by The Sault Metal Scene at 12:45 PM