We're entering an interesting stretch for concerts in Sault Ontario, as we've got four straight days of metal/hard rock shows starting tonight, and none of them grace the two official days of the weekend. As such, I've decided to break up the inevitable concert previews into two separate posts to spread things out and give appropriate emphasis to certain shows. With that said, this post has previews of events taking place tonight & tomorrow, so here's what you need to know before you head to either concert!

Our first concert preview today is for the Battle For The Blood, going down TONIGHT at The Roosevelt Hotel! Due to high advance demand for a second local opening act at the 3 Inches of Blood-headlined show at The Rosie on July 9th, promoter J.D. Pearce has organized a special battle of the bands for tonight (after a week's postponement) to find a 4th band to join the Vancouver-based power metal notables, fellow touring metal act Wretched, and locals The Bear Hunters on the lineup for this killer concert next month. As such, this is the second Sault Ontario battle of the bands of 2012, and it's nice to see another one so soon! 4 bands are competing tonight, and in alphabetical order, they are local hardcore quartet Changing Waves (replacing Shit Liver), Desbarats death metal standouts For All That Is Lost, local deathcore rockers The Valentine's Day Massacre, and extreme quintet Winkstinger, who should deliver some great and brutal competition tonight! Of the bands, only F.A.T.I.L. and The Valentine's Day Massacre have full battle experience, as they were a part of the three-way tie for third place at the Humane Society Battle in April, which alone indicates a likely close finish this time around! 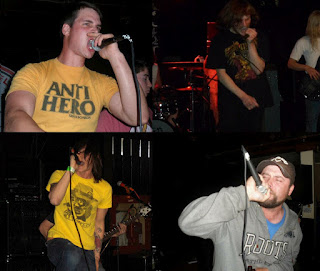 Winkstinger's Jesse Cook & Jonas Gasperas are no strangers to battle success either, including at least one victory with Soldiers of Misfortune back in the day, and a 4th place finish with Winkstinger-predecessors Operation: Killdozer in March 2009. Changing Waves bassist Terrence Gomes is also a battle veteran, competing with his old punk band Creedon & The Animal Detectives at the Algoma University battle in December 2009, so there's plenty of battle-tested veterans among tonight's lineup! As well, fellow Humane Society battle competitors T-Rex Manning will play a special set out of competition tonight, though where they will be placed in the performance order isn't public at the moment. Not entirely metal, but hopefully J.D. and company entertain all in attendance with their covers & original punk material! As for the battle itself tonight, here's what I know so far. For the four competing bands, performance order will be drawn randomly before the bands begin, and each band will have 30 minute sets to perform (I don't think there's any song limits or cover restrictions, at least not publically.) Judging will be done by YOU, the fans, which is different from most recent battles, but hopefully you guys pick the most deserving winner, instead of turning this into a popularity contest.

Admission is $3 for tonight's Battle For The Blood, which also essentially gives you a voting ballot as well. You must be 19 to attend, the first band is on at 9:30 PM, and for the record, no prizes have been publically announced beyond the 3IOB opening slot. For more details, visit the official Facebook event page! This should be an awesome battle, and I'm just disappointed that I can't be there for it! Even still, I know it'll be very difficult and close to pick a winning band (personally, I can't predict the result), and I hope that the bands tonight give it their all and are judged fairly by those in attendance at The Rosie! Can F.A.T.I.L. or The V.D.M. build on their strong battle performances in April? Can Jesse & Jonas return to the top with Winkstinger's extreme sounds? Can Changing Waves make the most of their late addition to the lineup? We'll find out tonight, and you guys know I'll have as much fallout from the event as I can scrape together, so keep your eyes peeled! For the sake of fairness and impartiality, I won't post a preview video here for any of the competing bands, but here's tonight's special performers T-Rex Manning covering a Misfits classic at the last local battle in April!

The other heavier local concert going down before Thursday is a punk & metal ALL AGES show TOMORROW NIGHT at The Oddfellows Hall, featuring three heavier acts! The show itself is being headlined by Saskatoon hardcore punk quartet Weak Ends, who'll bring a nice old school flavour and attitude to Sault Ontario tomorrow night that punk fans of all ages should appreciate! Very entertaining, and their stuff harkens back to the good old days! The heavier bands on the lineup include co-headliners (and local horror punk/metal favourites) Frightlight, Winnipeg cyber-sludge metal trio Soul Killing Female, and local melodic death metallers The Bear Hunters (guitarist Mitch Sirie is promoting this show), so they'll definitely be worth checking out! While you're likely aware of the two local metal bands, Soul Killing Female's genre-blending brand of doom metal and electronic influences will bring a unique flavour to this show, so definitely check them out, especially their older albums! The lineup is rounded out by Regina garage punk outfit The Royal Red Brigade (a very solid band with a nice raw essence and punk intensity), who are third between Frightlight & S.K.F., and local punk trio Redundant, whose amusing banter and talented punk material will come between S.K.F. and The Bear Hunters at tomorrow's show.
Admission is $10 at the door for this ALL AGES show, doors open at 4:30 PM, and the bands begin at 5:00 PM. For more details, visit the official Facebook event page! Though I'll still be out of town until Thursday, I know there's much quality to be had with this show tomorrow night, and though there are some outlying bands, there will be lots of aggressive punk for you punk lovers to take in at The Oddfellows Hall tomorrow (with enough metal to satisfy that end of the spectrum as well!) Definitely keep this concert in mind for tomorrow, and best of luck to all six bands! For a preview, here's Soul Killing Female playing their song "Isolationism" at a 2011 concert!
That's all for today, but stay tuned for more news and notes shortly, including more weekend concert previews! Thanks everyone!
Posted by The Sault Metal Scene at 2:24 AM