It's time for our first news post of the month, and it's chock full of recent news and notes to get caught up on, but make sure to check out this month's "Where Are The New Albums?" post below this one! Today, we have news on a local music store's impending relocation, and some concert lineup additions, but first, here's LOCAL CONCERT ALERTS, starting with one that's very short notice!! 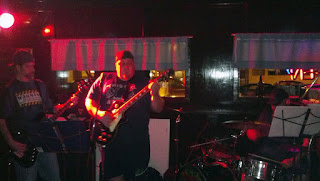 Sault Michigan hard rockers Powerslug are apparently playing at The Bird (a.k.a. Golanka's Bar) TONIGHT! This is the second in a two night weekend engagement at the local bar/concert spot (different from recent Saturday-only gigs), and I sincerely apologize for missing yesterday's show for coverage here. Similar story as usual for why: Guitarist Chris Gurnoe announced the weekend gigs on his personal Facebook page on Tuesday, and they slipped by me yet again (the lack of an online page still doesn't help though), but hopefully there was a good turnout yesterday! That said, Powerslug are still on for tonight at The Bird, and you know this talented band featuring End of Existence and Kilacel alumni will be ready to rock all night long with their entertaining hard rock covers! Note that in my quest to learn more on Powerslug sans online pages, I've seen nothing referencing if singer Aaron Fasel remained with the band after the name change from River Witch, and this new live photo only features members Chris Gurnoe, Chris Leask, and Bob Helsten, so I'm starting to think that Aaron left the band around the same time Ivan Schliska did last year.

If I hear anything definitive, I'll let you guys know, but go see Powerslug TONIGHT! Admission should be free, a 10:00 PM start time is likely, and you must be 21 to attend. Sounds like it'll be a fun show, so go see Powerslug TONIGHT at The Bird, and as I've said before, I'll try and stay better on top of Powerslug news in the future! May not succeed 100% of the time, but I'll try!

Next up, another new Roosevelt Hotel metal night has been announced for next month! Barring an announcement for June 28th, it looks like the series reverts to a bi-weekly schedule starting next Thursday, which would make this newly announced show on July 5th the 47th in the Rosie metal night lineage. Two bands out of a planned three band lineup have been announced so far, including headliners The Valentine's Day Massacre! This will mark the local death metal quartet's third Rosie metal night appearance and their first in almost four months, so look for a devastating set of originals and covers from them on July 5th! Joining them are local hardcore quartet Changing Waves, who haven't been seen on the local stage since January, and though this isn't the very next time you'll see them live (more on that in a second), it's great to see them back! Their energetic and diverse blend of hardcore sounds will surely be fitting at this show! A third band is to be announced for this concert, and we'll of course keep you guys posted as word comes in on that front.

Admission is free as you might expect, a start time of 9:00 or later is likely, but this show will be 19+, which was recently announced for all upcoming Rosie metal nights due to attendance & security concerns on their Facebook page, but the possibility of more all ages shows there does still exist. For more details, visit the official Facebook event page! This should be another solid metal concert, and the lineup's shaping up well, so keep an eye out for updates as they roll in!

In another new Roosevelt Hotel concert, metalheads should take notice, as a huge Canadian metal band is coming there next month! The band is the Vancouver-based power metal quintet 3 Inches of Blood, who will make their first Sault Ste. Marie appearance since around 2003 on July 9th, and they'll be sure to deliver a huge set of speed and power metal hits that harken back to old school metal at it's best, including material from their new album "Long Live Heavy Metal"! Also note that 3 Inches of Blood's lineup currently includes ex-Fear Factory bassist Byron Stroud, which is cool in & of itself! They'll be joined by Charlotte, North Carolina melodic death metal quintet Wretched on this tour, and they'll bring an aggressive and brutal mix of sounds and aggressive originals to the Rosie themselves at this Monday night concert! There will be at least two local opening bands, including local death metal quintet The Bear Hunters (nice fit) and one more to be announced, at least, so stay tuned for updates on the lineup. Doors open at 9:00 PM on July 9th for this 19+ show, and tickets will be $10 in advance, with them going on sale within the next week. For more details, visit the official Facebook event page!

Now if this isn't a big metal show for The Rosie, I don't know what is! Kudos to J.D. Pearce from Frightlight for bringing 3IOB here next month, I know this show will be a hit! I still find that the vocals for 3 Inches of Blood are very forced, but their musical abilities and proficiency are top notch, and faces will be melted! Also note that if you have tickets from J.D.'s last promoted show (the Die Mannequin-headlined show last month), you'll get first crack at advance 3IOB tickets, so stay tuned for updates on that, and much more as word comes in on this huge concert!

Also in the news, here's updates on a couple more concerts this month being promoted by Bear Hunters/Borderline Divine guitarist Mitch Sirie! First, the aforementioned Changing Waves have been confirmed as the third band (and now, headliners) for the 45th Rosie metal night this coming Thursday! This will be their first concert in almost 5 months, and though I don't know where they've been over the spring months, it'll be nice to see them rocking the local stage again next week! For more details on this show (opened by fellow local metal acts Winkstinger & Borderline Divine), click here! The other update is that a third out of town band has been added to the all ages concert on June 20th at The Oddfellows Hall, that being the Winnipeg cyber-sludge metal trio Soul Killing Female! They bring a slow but very heavy and diverse blend of metal genres to the table, and their sound will definitely turn heads, so do check them out at the above links! Just note that their new EP "Farewell To Light" is much softer than their older albums. They're slotted third in performance order for this show, with Weak Ends, local standouts Frightlight, and The Royal Red Brigade headlining and local bands Redundant & The Bear Hunters opening. Ticket information is still forthcoming, but click here and visit the above links for more on this show, including the poster on your left!

Lastly today, here's some big news from Case's Music! The popular instrument & lessons store is relocating downtown to 636 Queen Street East on July 9th, a little over a year after they formally re-opened following renovations & an ownership change at their (soon to be former) location at 173 Spring Street. In a statement on Case's Music's Facebook page, it has been indicated that their new home (inside the old Frame Centre location) is being renovated, and they said that the move downtown is their dream. As such, a blowout sale with sales of up to 50% off everything in store will run from this coming Monday until the Spring Street location closes on June 22nd, so if you're interested in discount music equipment, keep this sale in mind this month! Check the above links for details on the move, including timeframes and information relating to their lessons and summer camp. This is bound to be exciting for Jay & Carrie to move Case's Music to a more prominent downtown spot, and for music fans, it's conveniently placed! It'll basically be across the road from The Grand Theatre and just seconds from the new Coch's Corner (formerly Foggy Notions), but I wonder if there'll be added competition with Northland Music, which is half a mile down the road? The future's looking bright, so check the above links for more on Case's Music's pending move!

That's all for today, but stay tuned for more news as we enter the coming week! Thanks everyone!
Posted by The Sault Metal Scene at 4:00 PM