Let's mix stories from both sides of the border into this post after a stretch of nationally separated posts, so here's what's in store! Today, we have this week's classic video, a new local band's new drummer, and leading things off, lots of new media from a pair of bands' recent sets at a notable local music festival! Read on below for all the news, and check out this month's Saultites in Out of Town Bands Profile on RedStone Riot in the post below this one! (Updated on Thursday at 1:37 AM)

Most of Brimley metal trio Half A Man's set from LemmaFest this past Saturday is now on YouTube to check out! Frontman Erik Rintamaki uploaded four video files featuring the audio from their festival-opening set outside of Dondee Lanes onto his YouTube channel over the last few days, which make up the first new live concert media of Half A Man since their last shows as a quartet last spring! Note that these are accompanied by photos of the band and related images, including plenty from LemmaFest (even the other bands), which will hopefully make up for the lack of video footage somewhat. The first video, which is embedded below, features their originals "Slow Rock 75", "Cripple", and "Drunk", while the second video features a cover of Prong's "Snap Your Fingers, Snap Your Neck" and their originals "Don't Blame Me" and "Bad Way". The third video features Half A Man playing "Die In Disgrace" and their new songs "What If" and "Reborn", and the final video features the guys playing another new song "Clear", their Mike Lemma tribute song "Goodbye", and their original "Life Goes On", so click each of the above links to hear most of their LemmaFest set!

It's great to hear their set, and they sound really heavy here, even despite the lack of a second guitarist! If there was any stage rust, their show at The Bird on Friday probably shook it off. Video footage aside, I only really have two complaints: The crowd sounded extremely small (they were the first band though) and the recording doesn't include their set openers "Freedom Ride" & "Release Me", but the vast majority is still documented! It's awesome to get some media from any band at LemmaFest, let alone of this length, and their gritty and very heavy material should definitely get some due notice! Also in new LemmaFest videos: Infathom guitarist Sean Hayes posted two videos of the Munising metal band (well, 4/5ths of them) from their LemmaFest set onto his personal Facebook page, which are the first videos of a metal band I've seen from either year! As Facebook videos, I can't embed them here, but they're of Infathom's covers of Pantera's "Domination" and Shinedown's "The Sound of Madness", so click the above links or here to check them out. They sound very heavy and a nice change of pace, but there was some timing issues on the Pantera cover.

Solid stuff, and hopefully they play here again sooner rather than later, so check all of the above videos out, and the first recordings from Half A Man's LemmaFest set below! 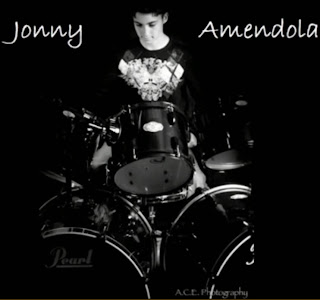 Next up, new local hard rock band Skeyes of Seven have announced the addition of Cherry Crush drummer Jonny Amendola to their lineup, replacing Chris Thompson. The band confirmed his addition to their lineup on Monday on their Facebook page, and they've indicated that he will be with the band for their debut performance at the Anvil concert at The Canadian Nightclub on July 25th. Jonny is perhaps best known locally for his work with Cherry Crush (alongside his dad, veteran local bassist John Amendola), but you may also remember a well publicized campaign earlier this year to see Jonny join a metal or hard rock band locally, which eventually helped lead to a brief stint as Acention's drummer, but hopefully joining Skeyes of Seven will lead to some big things for him! Playing with members of notable bands like Sense of Truth, Half Past, and Tripod the Dog can only help, and his talent from the YouTube videos we've seen of his drum covers is clear as day, so check his work out above, and buy your Anvil tickets A.S.A.P. at The Rad Zone, Music Depot, and The Canadian's front desk for $20!

And finally for today, here's this week's classic video! This week, we're focusing on a band that's not local for a change, but seeing as they have Saultites in their lineup and are returning to town on Saturday night, it makes sense to post a new video of theirs onto YouTube, and the band in question is Toronto hardcore/punk quintet Maximum RNR! The band currently featuring former Detroit/The Labour Of... bandmates Brenton "Diamond Brent Panther" Ellis and Curtis Faux have played here twice in the past, but their first stop with any local members was on February 19th, 2011 at Foggy Notions (now Coch's Corner), in one of the last major metal shows under the Foggy's name. Featuring their 2010-2011 lineup (including ex-bassist Davey Dee, as Curtis hadn't joined yet), they melted many faces at their show here last year, and while I missed the show with a cold, I heard awesome things from it! One video from the concert has surfaced online that I can tell, which was shot by Brent's former Lion Ride bandmate Mikey Hawdon from a unique angle: Behind the band on stage, which gives an awesome view of a huge crowd, and though we don't see the band from a typical position, their fast paced hardcore sounds come through somewhat on this camera, even if the video is short!

Posted onto Facebook 5 days after this show, you can see the original video at http://facebook.com/photo.php?v=10150114592587993. NO COPYRIGHT INFRINGEMENT IS INTENDED!! All credit for this video goes to Maximum RNR and Mikey, I'm just trying to share this video with a wider audience like it deserves! This is a nice unique video of Maximum RNR delivering their maximum rock n' roll to their Saultite fans, so check it out below, let me know the title of the song if you have it, and stay tuned for Round 3 on Saturday night at The Rockstar Bar, with our preview of that show coming tomorrow or Friday!

That's all for today, but stay tuned for weekend concert previews, more news, and our review of The Harsh Heads' album by the end of the week! Thanks everyone!
Posted by The Sault Metal Scene at 3:20 PM