Just a week ago, we devoted a whole post to new videos, and now, we're doing it again! A bunch of new local metal-relevant videos have came to my attention over at YouTube, so today, we have another local metal video showcase for you guys! Included below are new solo performance videos from members of a Sault Michigan band, more archive audio from a 1980s Sault Ontario band, and a solo original from a local band frontman, so let's get things rolling!

Splitshot guitarist Chris Hubbard has posted two new solo performance videos onto his YouTube channel! Uploaded yesterday, the videos feature Chris rocking out some very nice solos on his Peavey EVH Wolfgang guitar, one of which is a cover of Van Halen's "Eruption"! Comments from viewers on YouTube say it all, but this is a great cover of the classic Eddie Van Halen solo, and if you like Van Halen, definitely check it out at the above link! Chris has clear skill, and he puts it to use here! For length and content though, I've embedded his other new video below, where Chris tested out his new pickup. It's 10 minutes of varied solo guitar jamming and very cool soloing, and he's on fire through the whole video! Chris deserves more credit for his guitar work locally, and remember, you can next see him live with Splitshot on December 9th and 10th at The Rapids Lounge! Definitely check out his new videos above, and you can watch his new 10 minute video below!

Meanwhile, Chris' Splitshot/ex-Nixxon Dixxon bandmate Jake LaLonde has posted his own new solo video onto his YouTube channel yesterday, but it's not what you might expect. In this video, Jake is covering Cee-Lo Green's "Fuck You", surprisingly enough, but honestly, Jake seems to have the drum track for this song down well! I'm no Cee-Lo Green fan, but "Fuck You" has a catchy element going for it, and it beats that Auto-Tuned garbage, so it could be a lot worse. Jake sounds good here, nice and clear, and he knows the track well! Nice performance overall, so give Jake's cover of "Fuck You" a look below! 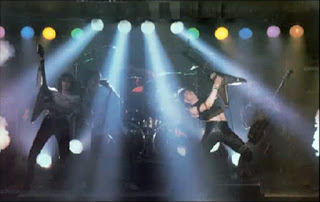 Next up, here's some cool new recordings of a 1980s local hard rock band! Like his earlier upload of a Satric song, these come from Sneaky Pete guitarist Mario Carlucci, who uploaded two audio recordings of his mid-1980s band Exodus onto his YouTube channel over the last two days! These came from a live cassette that he recently found from a concert circa 1985, and they featured Mario along with then-bandmates Steve Scali on vocals, Ernie DiBerardino on guitar, Tony Rota on bass, and Angelo Foggia on drums. The posted songs are of Exodus covering Yes' "Owner Of A Lonely Heart" and, as posted below, Blue Oyster Cult's "(Don't Fear) The Reaper", but how do they sound! Pretty good, they seem to know the songs well and inject their own flavour, but the recording is slightly muddy. This was the 1980s though, so I'm not expecting the world, I'm just letting you guys know.

Sounds like they were a talented band with chemistry, but the Blue Oyster Cult cover needs more cowbell.... too obvious? Good stuff, so check out more from Mario's past and present output above, and here's Exodus covering "(Don't Fear) The Reaper" from the mid 1980s!

And finally, here's another new solo performance video from ApocalyptiCDistroyeR frontman Jesse Middaugh, who posted this video of him playing an acoustic original song named "You Mean The World To Me" on the band's YouTube channel on Monday. It's rough and slightly repetitive, but it does have some emotion and meaning in the lyrics, and everything's clear enough. Not the heaviest thing that Jesse or the band have released, but if you wanna hear a rough take of an acoustic song, this is worth a listen, so give Jesse's new video a look below!

That's all for today, but stay tuned for more news over the next few days, including another metal-relevant Sault Star article, our next YouTube Channel Profile on Garden of Bedlam guitarist Josh Belleau's old channel, and more! Thanks everyone!
Posted by The Sault Metal Scene at 1:25 PM