It's CD review time on the SMS! After a lot of questions over what I'd review, it came to the end of the month and I don't have any of the albums I'd mentioned in the past yet. Soon though, I promise! So when I was debating a new album to review, I figured I should tie it in with this weekend's stacked lineup of concerts. And seeing that three members of a brand new local band playing this weekend were in a local metal band with an album, I figured now's as good a time as ever! So this month, I'm reviewing "The Rust Angel E.P." by inactive local punk/metal band Fitswitch! 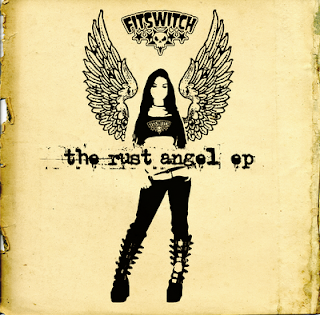 Released in (I believe) 2005, "The Rust Angel E.P." was Fitswitch's only official album released, though it was a limited edition, so only 40 copies were put out. The lineup that recorded this album included current Frightlight bandmates J.D. Pearce on vocals, Rick White on lead guitar, and rhythm guitarist Kevin Powe, alongside former Scary Uncles bassist Andrew MacDonald and original Frightlight drummer Larry Mousseau. I was worried that, with the limited release of the E.P., I may never find a copy, but huge kudos to Kevin Powe for hooking me up with one! Scattered songs are available online on various Fitswitch internet pages, but the whole album is nowhere to be found that I know of. So, with the best possible intent, I uploaded the album to YouTube! After all, what's the point in reviewing something only 40 people own when most people don't have access to it? If you want to hear all the songs on "The Rust Angel E.P.", click here, or click on each song's name as you read the review! NO COPYRIGHT INFRINGEMENT IS INTENDED! Seven songs to review, let us begin! (Updated on September 28th, 2012)

The first song on the E.P. is "12 Steps", and it begins with some kinda chant-like vocals from J.D. that will no doubt get the crowd singing along! One thing I noticed is that the singing is really loudly mixed compared to the instruments, but don't let that detract from the music if you can help it! Nice riffing, drumming is solid, it has a nice punk sound with a heavy metal edge, and it works well! I like the guitar a lot, good solo and some interesting use of pinch harmonics! Kinda repetitive though. A great song to get a crowd going, but the best is yet to come!

"My Own Sickness" is next, and I love the opening! Starts off unassuming enough, but then some great guitar soloing kicks in! Nice surprise start to the song! Vocals are better mixed on this one, J.D.'s got a very good punk voice, raw and heavy, perfect for what the band plays! Not as repetitive as "12 Steps", the shorter length helps with that though. Better song overall too, as evidenced by the speed and the general heaviness! Plus, another great guitar solo near the end too! My absolute favourite song on the E.P., it was always a joy to hear Fitswitch play this live!

The third song is "Teabag", which is a slower song, yet shorter too. With better production, this could fit well on a rock radio station. It's good, and pretty catchy, I'd be tempted to sing along if I knew the lyrics! Nice chugging guitars. The song sounds straight-to-formula, no guitar solo, and J.D.'s singing is better suited to heavier and faster material. Good, but not the standout of the album. Following that, we have the album's title track, and the only Fitswitch original to become a regular Frightlight track, "Rust Angel"! Interesting opening, it reminds me of a surfing kinda band (if that makes sense), and that flavour follows throughout the song. Funky, but not in a bad way. It's different, not especially heavy, but not horrible either. Riffs are light, but still "rock"...it's hard to describe, I don't listen to a lot of "surf" type songs. Easily the most unique of the songs on the E.P., I dig it, but I'm missing the heaviness and raw edge of the first two tracks.

Luckily, things get back to normal with the next song, "March Of 1,000 Corpses", which sounds similar for the opening songs, but the vocals sure are different! Whoever's doing the verses sure isn't J.D., they have a higher pitched aggressive style, which caught me a bit off guard! It's probably Rick or Kevin, either way, they're not bad for supporting vocals! J.D. sings the chorus in a more reserved, almost clean vocal style. Interesting trade-off! The song has some great soloing, and the second singer chimes in by chanting "LEFT! RIGHT!" repeatedly (as in, for the march of the corpses.) Another good excuse to get the crowd involved! Solid song, different enough to stand out, and heavy enough to satisfy punk and metal fans!

That was the E.P.'s longest song, but things get shorter and more to the point from here! "Only Wanna Be With You" is the sixth track, and in my opinion, is the most punk-sounding of the tracks! No real "metal" to speak of here. That being said, it's pretty good! Nice solo as well, though I'm more partial to the ones in "My Own Sickness"! Punk fans will especially like this song, though if you're looking for some heavy riffs and angry vocals, this won't be the song you wanna hear. Even still, I like it! The album closes with "Bitch Anthem", which, at 2:43, is the E.P.'s shortest song. Another more punk-sounding song, but it has loads of aggression, particularly thanks to the screaming of "FUCK YOU BITCH" repeatedly through the song! The two singers alternate saying that and singing the song, and it works well! Again, another song that will get the crowd singing along! Nonstop hard hitting punk/metal, a great way to end the E.P.....or so we thought! As it turns out, there's two bonus tracks! Not sure how they were hidden on the original disc, but they were there, and I'll review them for you guys too!

One was a cover of The Misfits' song "When Eagles Dare"! Fitswitch always drew a lot of influence from The Misfits (even using their font in band pics/logos), and it shows with how well they pull this cover off! Sounds very close to the original song, if anything, I can make out the instruments better! J.D. sounds at ease singing the song, and any Misfits fan should appreciate this cover, as do I! The second bonus track is (curiously) a cover of "Rock You Like A Hurricane" by The Scorpions! I don't think this was the best song for them to cover, but if their goal was to cover an 80s metal song and make it sound like one of their originals, they succeeded! However, this song is really where the production quality suffers. On high volume, things sound a bit distorted at times. The band do a good job, but no offense at all, I prefer the original, mostly for the production quality.

Overall, I do like "The Rust Angel E.P.", it has that punk/metal sound down very well, and there's some really good songs! Rick and Kevin are solid throughout on guitar, Andrew's bass is good as well, dependable and heavy. Larry's great on drums, can't complain there! However, it's not perfect by any means, mostly from the production quality. But hey, it works for the songs, gives some of them a more raw punk feel. Trust me though when I say this: You haven't heard these songs properly until you've seen Fitswitch live, hopefully they'll have another reunion show down the road! Also, and maybe it's just the metalhead in me, but I wish some songs were heavier and angrier. Overall though, it accomplishes what it's supposed to, and I like it. There's room for improvement, but I would definitely buy it as it stands today! Now, here's hoping for a reunion in the future, and lasting success for Frightlight!

Another month down, another CD reviewed! So, what's being reviewed in November? By all realistic accounts, it will be Stillbroke's debut album, "Never Enough"! I should have it before I get "Woods IV: The Green Album", which will likely be reviewed in early December as long as releases aren't held up. "22" by Sykotyk Rampage will probably be a 2010 review now, but it'll be worth the wait! Stay tuned for more updates as I get them, cause the Stillbroke review could be any day now! That's all for now, stay tuned tomorrow for this weekend's HUGE local concert previews post!
Posted by The Sault Metal Scene at 8:25 PM